Horse-drawn carriages to be banned from Melbourne's CBD

Horse-drawn carriages to be
banned from Melbourne's CBD 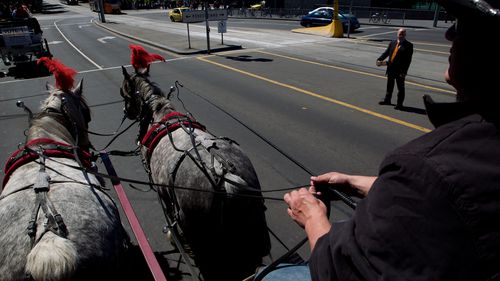 Horse-drawn carriages will be prohibited from operating in Melbourne's CBD from next month. (Simon O'Dwyer/The Age)
Horse-drawn carriages will be prohibited from operating in Melbourne's CBD from next month.
Operators will however be permitted to work on the outskirts of the city, including the Royal Botanic Gardens and other park precincts.
Transport Minister Ben Carroll said the decision was driven by safety.
The new changes will mean that carriages will be prohibited from all roads and paths within the area bound by Flinders Street, Spring Street, La Trobe Street and Spencer Street.
"We know that the city is getting busier and busier and there are more trams than ever. We made the difficult the decision but right decision to ban horse-drawn carriages in the CBD," Caroll said.
"We're taking action to increase safety and traffic flow on Melbourne's busiest streets as people increasingly return to our city's roads and footpaths.
"The planned changes will make moving through the busy Hoddle Grid safer and easier for everyone – pedestrians, drivers, cyclists, delivery vans and trams."
In 2017, the City of Melbourne stopped providing permits for horse-drawn vehicles in some parts of the CBD.
In March 2021, a horse pulling a carriage in North Melbourne collapsed and died in front of witnesses.
Melbourne Against Horse-Drawn Carriages shared the image, showing the horse lying on the wet road under two blankets.
Campaign director Kristin Leigh said she was "absolutely thrilled" with the news that carriages will been banned.
"This is something we have been calling for for almost a decade," she said.
Animal Justice MP Andy Meddick has been a long-time advocate for the ban.
Taking to social media today, Meddick said it was a "huge win".
"This is a huge win for horses who don't belong on city streets," he said.
"It is a great honour to be able to take these issues to parliament on behalf of the people who campaigned so hard for change."
The ban will come into effect from June.
Farah News /9News