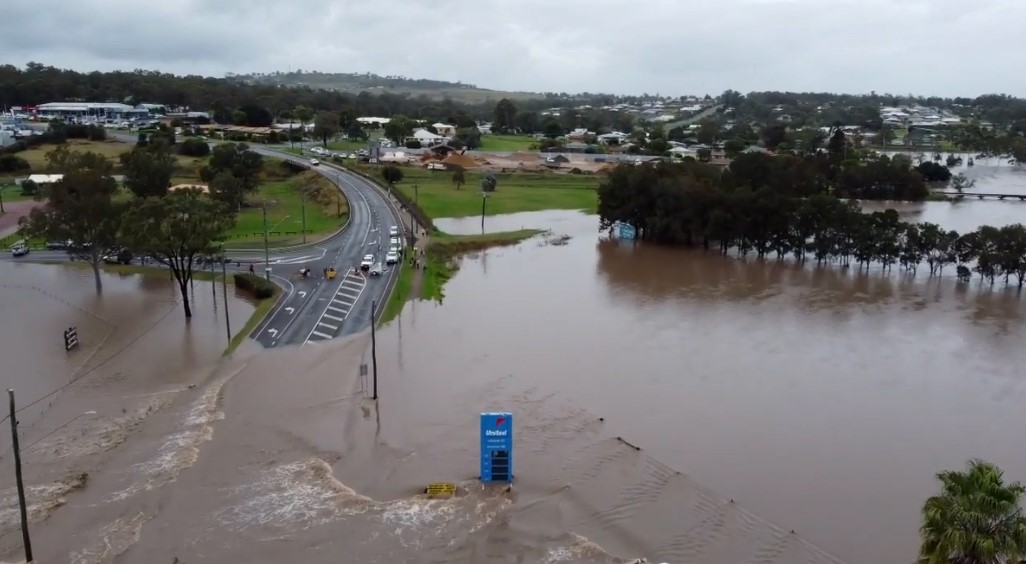 Floodwaters are continuing to rise in some south-east Queensland communities in the second devastating weather event for the state this year.
Residents in Gympie are preparing for the worst of the flooding event today while Laidley and Warwick are beginning to clean up after water swept through the towns yesterday.
Multiple warnings remain in place this morning for Cressbrook Creek, the Scenic Rim and Gympie.
The dam at Cressbrook Creek in the Somerset region is one-and-a-half metres above the spillway and there may be an increase in the levels in the coming hours.
Residents in the region are warned they may need to evacuate in the coming hours.
Laidley River and the Mary River are expected to reach the major flood levels this morning.
The Mary River is expected to peak at 15 metres.
Queensland Fire and Emergency Service coordinator James Haig said the state has seen less rain this morning but warnings remain to stay "vigilant and alert".
He said there were 14 flood rescues overnight.
"We had over 120 calls for assistance to the SES from sort of Brisbane north, largely, but across the whole of the south-east really," he said.
"So, still very busy."
The weather event is now moving north with the Sunshine Coast next in the firing line.
The Bureau of Meteorology said communities in the Sunshine Coast hinterland should be prepared for intense rainfall as two "atmospheric rivers" above dump rain acros
The state's premier Annastacia Palaszczuk said yesterday the intense rainfall the state is currently experiencing is not as heavy as the previous flooding event in February, which caused multiple deaths and the destruction of homes.
"This rainfall is actually more sporadic, and not as heavy," Palaszczuk said.
"But we are still seeing some cases of flooding, and the river rising in particular areas.
"We are asking people where possible, if you don't need to be out on the roads, please don't travel unless you absolutely must."
All flood warnings can be viewed here.
Residents are urged to follow the advice and emergency alerts of their local councils and keep up to date with BoM updates.
Farah News /9News