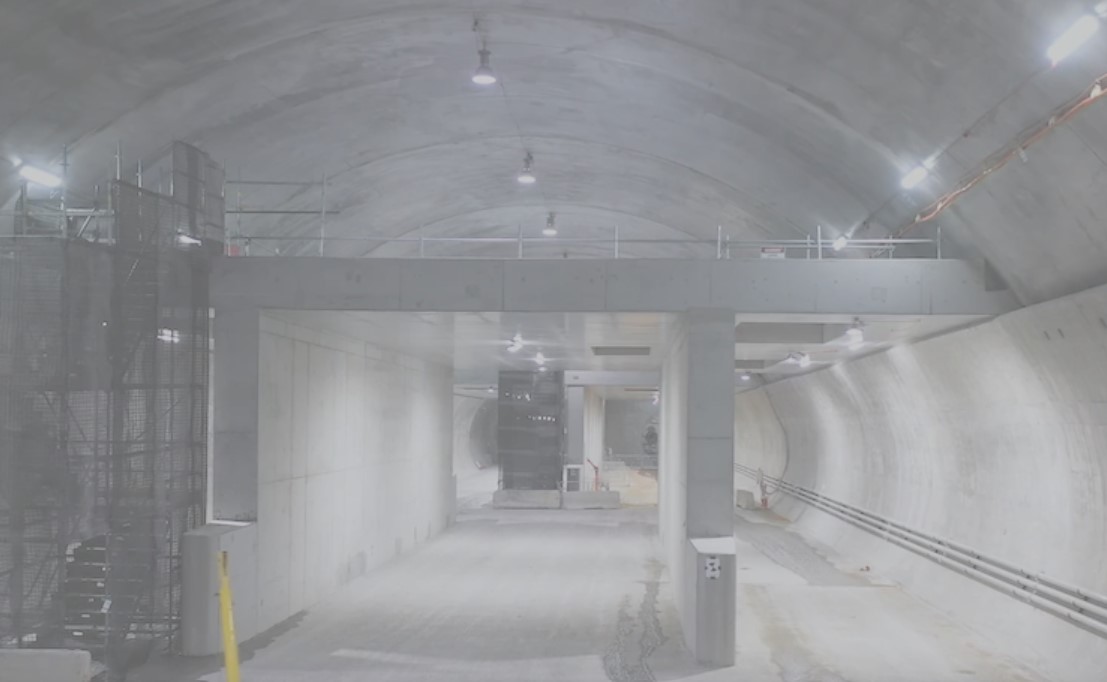 The newly built Barangaroo Metro Station tunnels were unveiled last year.(Supplied: NSW Metro)
NSW's major transport infrastructure projects are facing significant cost hikes, with the price tag for the Sydney Metro City and South West blowing out by about $6 billion.
The increase was revealed in the state budget papers, which were made public on Tuesday.
The project was estimated to cost between $11.5 billion and $12.5 billion.
To date, the government has already spent almost $13 billion on the metro link that will connect Chatswood under the Sydney Harbour through to new stations in the CBD and south-west to Bankstown.
Budget papers show the government expects the project to cost a further $5.1 billion over the coming four years.
It's expected to be completed in 2024 — 10 years after construction first began.
The first stage of Parramatta's light rail has also seen a cost blowout of $475 million.
Transport for NSW has been contacted for comment.
A Sydney Metro spokesperson said the additional costs reflected market conditions outside of the government's control, including the COVID-19 pandemic.
"The revised cost of the project includes $1.7 billion of costs that can be attributed to COVID — which caused significant disruption to critical workforce, construction production, supply chain and program," the spokesperson said.
Other Sydney projects have stalled as the government shifted its priorities this budget, with just $1 million committed in the 2022-23 financial year to planning the Beaches Link.
That decision followed an Infrastructure NSW report, recommending the shelving of some "mega projects" in favour of smaller ones because of labour shortages and ongoing COVID-19 impacts.
$602.4 million in funding has been locked in for stage two of the Parramatta Light Rail, which will allow for detailed planning as well as the construction of a new bridge over the Parramatta River at Melrose Park on the proposed route.
Opposition transport spokesperson Jo Haylen said money wasted on blowouts meant fewer funds for projects "desperately needed in rapidly growing areas of Western Sydney".
"In real terms, this $6 billion blowout means $6 billion out of the infrastructure pipeline for good," she said.
"It means that growing communities will have to wait longer before they get new transport services like rapid bus, Parramatta Light Rail stage two, and the airport metro.
"It's no wonder that the government hasn't announced any new transport projects west of Parramatta. They have blown the budget on existing projects."
Farah News /ABC