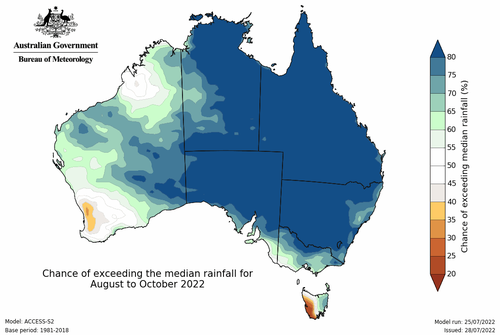 Wet weather is set to continue into spring across parts of Australia. (Bureau of Meteorology)
Wet weather is set to continue into spring across parts of Australia.
Wet weather is set to continue into spring across parts of Australia. (Bureau of Meteorology)
South Australia and Victoria are next in line to be hit with the same damaging winds and dangerous seas felt by Western Australia earlier this week.
The most powerful cold front to hit Australia this winter is moving from west to east, bringing with it wind gusts of up to 100km/h.
Homes right across the southern part of the country, including southern New South Wales and Tasmania, are under threat as the complex low pressure system moves across the country.
The Western Australian capital was battered by heavy winds and rain this week, with a ceiling coming down on a family overnight, and a power outage at Perth Airport leaving hundreds stranded on the tarmac and in terminals.
Power was restored just after midnight, leaving multiple flights delayed or cancelled.
Across the city, about 35,000 people lost power yesterday, with 10,000 still unable to turn on the lights this morning.
Heavy rainfall is expected in some regions, with isolated major flooding possible in catchments in southern NSW, northern Tasmania and north-east Victoria.
Winds exceeded speeds of more than 110km/h in some parts of Victoria, with warnings of gusts reaching 130km/h.
There were also reports of flooding in the south-east, and severe weather warnings in place across a number of areas, including the Central Highlands and Dandenong regions.
NSW has been warned to brace for possible severe thunderstorm activity from today.
Heavy rainfall between 45 and 60 mm are possible across the state's Snowy Mountains and South West Slopes on Thursday.
A flood watch for inland NSW has been issued with flooding possible from Thursday.
There are a number of strong wind warnings for northern parts of Tasmania, as well a several minor flood warnings for the state.
Damaging wind gusts of 80 to 90 km/h are expected overnight on Wednesday.
The bureau has warned of already wet catchments across the flood watch areas, with rivers likely to be responsive to rainfall.
A minor flood warning is current for Mersey, Meander, North Esk and Macquarie rivers.
The BoM is warning Victorian residents of localised rainfall of up to 60mm tomorrow morning, with thunderstorm activity is expected to increase during the day.
Farah News /9News