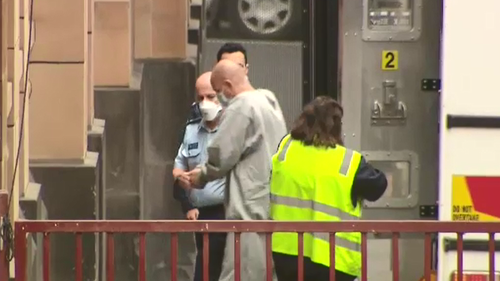 James Leonard Fairhall has been jailed for 25 years for murder of partner in front of kids (Nine)
Warning: This story contains the name and images of a deceased Indigenous person.
Noeline Dalzell's teenage children screamed and tried to shield her from their father before he reached between them and fatally stabbed her in the neck.
Every day the three children relive the trauma of watching James Leonard Fairhall murder their 49-year-old mother.
"There is an enormous hole left in their lives by the loss of their mother, three young lives forever changed by your despicable violence," Victorian Supreme Court Justice Jane Dixon said, jailing him on Friday for 25 years.
The 47-year-old man was jealous and enraged when he pursued Dalzell through her Seaford home, in Melbourne's southeast, in February 2020.
She had become romantically interested in an old school friend after ending her 20-year on-off relationship with Fairhall, who had been violent towards her in the past.
Fairhall moved back into the family home a few months earlier when he had nowhere else to live.
Two days before the murder, Fairhall had told friends he wanted to kill the man Dalzell was speaking to.
Hours before the stabbing, he called her new love interest and apologised to him.
When his children arrived home from school on February 4, they found their parents arguing. Fairhall yelled at Dalzell and accused her of cheating on him.
When he put down scissors he had been holding, their youngest child, then 13, hid them.
Fairhall then armed himself with a large kitchen knife.
The eldest daughter, aged 16, and son, 15, pushed their mother into the son's bedroom to protect her, but Fairhall followed them.
The two children put themselves between their parents, while the younger daughter watched on.
All three screamed at him to stop before Fairhall reached over and stabbed their mother in the neck.
Fairhall's son tackled him to the ground and he dropped the knife, allowing Dalzell to flee to a neighbour's home.
Fairhall continued to pursue her, armed with a second knife, but Dalzell collapsed in the street and died from her neck wounds.
Justice Dixon said Fairhall's offending was a serious example of intimate partner murder.
"The tragic legacy of your crime is that your three children have effectively lost both parents as a result of your actions," she said.
Fairhall tried to blame his children in letters he wrote them from prison. They were never handed over, but were used by prosecutors to show his lack of remorse for the crime.
With time served he'll be eligible for parole in 16 years.
Support is available from the National Sexual Assault, Domestic Family Violence Counselling Service at 1800RESPECT (1800 737 732).
Farah News /AAP/9News