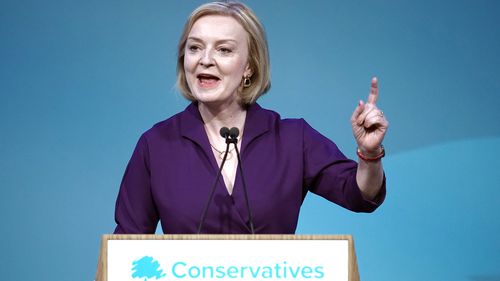 Liz Truss, Britain's Foreign Secretary is announced as the next prime minister. (Photo by Christopher Furlong/Getty Images) (Getty)
Liz Truss has won the race to be the United Kingdom's new prime minister, beating out Rishi Sunak in the Conservative Party's leadership ballot.
Truss, who was foreign secretary under former prime minister Boris Johnson, had been widely tipped to win the ﻿ballot ahead of ex-treasury chief Sunak after winning the support of many Tories with her Thatcherite zeal to roll back state intervention and slash taxes.
In the end, she convinced 81,326 of about 170,000 paying Tory party members to vote for her and Sunak managed 60,399.
Graham Brady, the 1922 Committee chairman, said a little more than four out of five eligible voters participated.
Truss gave a short speech when her victory was announced shortly after 12.30pm (9.30pm AEST), promising to pursue a Conservative agenda focused on personal freedom and responsibility.
"We need to show that we will deliver over the next two years," Truss said.
"I will deliver a bold plan to cut taxes and grow our economy.
"I will deliver on the energy crisis dealing with people's energy bills, but also dealing with the long-term issues we have on energy supply.
"And I will deliver on the National Health Service."
Sunak had sought to paint himself as the more realistic economist, saying he would temporarily cut the value-added tax on energy bills.
But he insisted he wouldn't "max out the country's credit card" and said significant tax cuts should wait until inflation is under control.
After the result was announced, Sunak thanked his supporters and called for the party to unite behind Truss.
Queen Elizabeth II is scheduled to formally appoint Truss as Britain's prime minister on Tuesday.
The ceremony will take place at the Queen's Balmoral estate in Scotland, where the monarch is spending her summer, rather than Buckingham Palace in London.
New PM facing economic crisis
Truss inherits an economy heading into a potentially lengthy recession and will need to jump straight into tackling the cost-of-living crisis walloping the UK.
The two-month leadership contest left Britain with a power vacuum at a time of growing discontent across the country amid spiralling energy and food costs.
Johnson made no major policy decisions after announcing he was stepping down on July 7, and officials insisted that measures to address the energy cost crisis would be deferred until his successor is in place.
Meanwhile tens of thousands of workers have gone on strike to demand better pay to keep up with relentlessly rising costs.
Inflation is above 10 per cent for the first time since the 1980s, and the Bank of England has forecast that will reach a 42-year high of 13.3 per cent in October.
That's largely driven by soaring energy bills, which will jump 80 per cent for the average household starting next month.
The opposition Labour Party and other critics accuse the government of being "missing in action" during a summer of discontent that saw tens of thousands of rail staff, port and postal workers, lawyers and garbage collectors go on strike to demand better pay to keep up with spiralling costs.
"We've had far more from the latest prime minister about cuts to corporation tax over the summer than we have about the cost of living crisis, the single most important thing is bearing down on so many millions of households," Opposition Leader Keir Starmer said, after the announcement.
"And that shows that she's out of touch, that she's not on the side of working people."
Scottish First Minister Nicola Sturgeon pledged to look past political differences to develop a good working relationship.
While the economy is certain to dominate the first months of Truss's term, she will also have to steer the UK on the international stage in the face of Russia's war in Ukraine, an increasingly assertive China and ongoing tensions with the European Union over the aftermath of Brexit – especially in Northern Ireland.
She has talked tough as foreign secretary on all three main issues, though some analysts speculated she would tone down her robust rhetoric after becoming leader.

It's not clear how Truss's right-wing brand of conservatism, which played so well with party members, will go down with the wider British public — especially those most in need of government relief to help heat their homes this winter.
"This is someone who believes in the market in a radical way, someone who believes that the objective of government is to get towards a much smaller state sooner rather than later. She takes that very seriously," said Steven Fielding, a professor of political history at Nottingham University.
Johnson was forced to resign after a series of ethics scandals that peaked in July, when dozens of cabinet ministers and lower-level officials quit in protest over his handling of allegations of sexual misconduct by a senior member of his government.
Both Truss and Sunak were key players within Johnson's Cabinet, though Sunak resigned in the last days of Johnson's time in office.
Farah News /9News