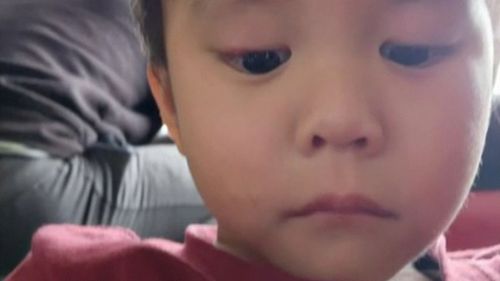 Three-year-old Roland Sakhawang was killed in a Melbourne shed fire on Saturday evening. (9News)
A three-year-old boy killed in a Melbourne shed fire on Saturday evening has been remembered as a "very happy, energetic boy" who "adored his siblings".
Roland Sakhawang, just shy of his fourth birthday, was playing in the garden of his family's Ringwood home in the city's east at 6.15pm when he became trapped by a blaze that broke out inside the shed.
Firefighters managed to extinguished the blaze, which completely engulfed the shed, however by the time Roland was found it was too late.
"We were having a barbecue and while he went inside to retrieve something or go to the toilet there was a fire happening," Roland's father Siang Sakhawang said.
Despite Sakhawang's desperate attempts to rescue his son, he could not be saved.
"He made a family very happy, although he couldn't speak yet," he said.
"Just from his behaviour, his actions, not just the family but anyone who met him (he made) very happy."
The Burmese-Melbourne community has banded together and will start two weeks of traditional mourning for Roland.
Police are currently investigating the cause of the fire, however it is not being treated as suspicious.
Farah News /9News