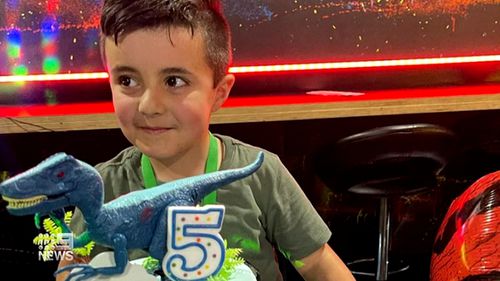 Jayden is being remembered as a "bright, bubbly boy". (9News)
A boy who drowned in floodwaters in rural New South Wales at the weekend has been identified as five-year-old Jayden El Jer.
The El Jer family, from Sydney, had taken a trip to Dubbo Zoo on Friday and were on their way back to their holiday home at Tullamore when all five became trapped in raging floodwaters about 8pm.
Jayden's parents and two young siblings were able to make it to safety from their submerged Hilux ute, however the five-year-old became lost underwater and was unable to be found.
A group in a nearby vehicle that also became caught by floodwaters came to the family's aid and notified police.
After an exhaustive overnight search, Jayden's body was found at 3pm yesterday.
Rural Fire Service volunteers Fiona Aveland and her husband were among the first responders on scene.
Aveland said the father who escaped the Hilux was "distressed" by what was an "awful" situation.
"He wanted help for his wife and daughter, they were on another tree," she said.
Aveland said emergency responders on the other side of the creek rescued the family in a tinnie.
Jayden is being remembered as a "bright, bubbly boy".
The car has since been retrieved and police are investigating.
Tullamore has been hit with heavy rain since Wednesday, with 100 millimetres in just one day flooding the Bogan River.
Farah News /9News