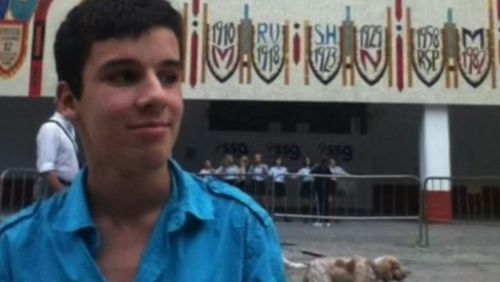 Legal clerk Lucas Peyret, 21, died a week after keyhole surgery to treat acute appendicitis at Randwick's Prince of Wales Hospital on May 26, 2019. (Nine)
A coroner will examine how a healthy, young Sydney man died after routine surgery and whether hospital staff properly kept his distraught family in the loop.
Legal clerk Lucas Peyret, 21, died a week after keyhole surgery to treat acute appendicitis at Randwick's Prince of Wales Hospital on May 26, 2019.
The uneventful surgery ended at 9.39pm but within minutes of his breathing tube being removed, Peyret's oxygen saturation rapidly dropped and his heart stopped at 9.55pm.
Five rounds of CPR successfully resuscitated him at 10.18pm but his oxygen-starved brain suffered severe damage and he was placed on life support.
The Darwin-born man was in effect declared "brain dead" on June 3, his inquest was told on Monday.
A central issue before coroner Erin Kennedy is whether the application of anaesthetic reversal agent sugammadex caused severe anaphylaxis and Peyret's sharp decline.
Medical experts giving evidence later in the week will be asked to consider whether another drug could have been used.
Peyret's family has raised concerns that the surgery occurred on a Sunday evening with an anaesthetist-in-training and without imaging to confirm the clinical diagnosis of appendicitis.
His mother was also concerned that "she was not getting the whole truth" from hospital staff about her son's treatment after his post-surgery crash, counsel assisting Simeon Beckett said.
"(She is) disappointed by the system and how she was treated by the system," he said.
However, Beckett said the hospital's discussions with the Peyret family had been given a positive assessment by an expert in open disclosure following adverse medical events.
Meanwhile, Royal Prince Alfred anaesthetic Associate Professor Paul Forrest said the surgery was well within the trainee anaesthetist's abilities and she'd done "everything possible" in the resuscitation effort.
The anaesthetist-in-training said she addressed the risks of aspiration and the roughly-1-in-4000 chance of a serious anaphylactic reaction to drugs used in surgery.
"I felt he understood and he was competent to understand," Sukhi Hegde told the inquest.
Peyret had felt unwell and in pain for about a day before his surgery and slept 12 hours the night of May 25.
Still unwell the following morning, he went to a GP who suspected the appendix may have burst and urged him to rush to hospital.
That preliminary diagnosis - based on the man's acute right abdominal pain, right shoulder pain, fever and vomiting - was backed by an emergency doctor, blood results and surgical registrar Jakob Koestenbauer.
"The decision on whether to confirm that (diagnosis) even further could lead to delays," Dr Koestenbauer said.
"There wasn't sufficient uncertainty."
Advised of the risks, Peyret rejected delaying surgery or taking a conservative course used in mild cases, Koestenbauer said.
Another surgeon who led the appendectomy said appendix removal was "the bread and butter of acute general surgery" and Peyret's high score on a diagnostic scale fit the bill for someone needing urgent attention.
His removed appendix was swollen, inflamed and had other signs of infection, she said.
When he crashed, she said she was "rather confused because the surgery was so routine".
The inquest continues.
Farah News /ABC