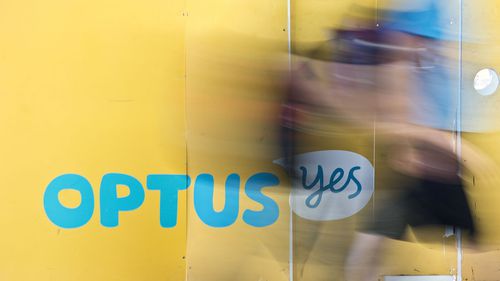 An estimated 9.8 million customers' details are believed to have been compromised in the breach. (AAP)
Victims of the Optus hack are being warned about a new scam doing the rounds as fraudsters attempt to "cash in" on the data breach.
Scamwatch issued the alert yesterday explaining many scammers will try to offer false compensation following last Thursday's cyber attack, which exposed nearly 10 million Australian customers.
"﻿Beware of scams claiming you're eligible for financial compensation for identity theft," it wrote posting a photo of an example email.
The email claims the receiver has become a victim of identity theft, before claiming the offenders have been caught and ordered to pay a large settlement.
It comes as Australians report being blackmailed ﻿via text by supposed hackers demanding $2000 because the telco giant refused to pay a ransom.
Although the alleged perpetrator behind the attack has backtracked and vowed not to release - or sell - the personal data, cyber-security experts are skeptical.
"I don't believe it. I don't trust criminals," Alastair MacGibbon from CyberCX told Today.
"That means this data is still out there. Can't put it back in that bottle."
It was revealed yesterday, Medicare numbers were also among the personal information exposed.
This is in addition to names, date of births, emails, phone numbers, addresses, and numbers of ID documents – such as drivers licence numbers or passport numbers.
Farah News /9News