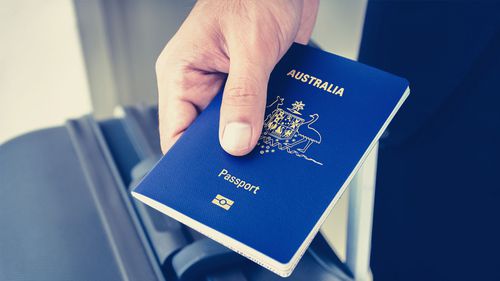 Australians are facing the prospect of having to get a replacement passport after an Optus data breach. (Getty)
The Australian government said victims and taxpayers should not have to foot the bill to replace passports for those whose data was compromised in last week's Optus breach.
﻿Foreign Affairs Minister Penny Wong has written to Optus to confirm if the Australian telecommunications giant will pay for victims of the data breach to replace their passports if they wish to apply for one.
"There is no justification for these Australians - or for taxpayers on their behalf - to bear the cost of obtaining a new passport," she said.
"I therefore seek your earliest confirmation that Optus will cover the passport application fees of any customers affected ﻿by this breach whose passport information was disclosed and who choose to replace their currently valid passport."
A new 10 year passport costs for anyone over 16 costs $308, while a five year passport is $155﻿.
You can expect to fork out an extra $225 ﻿for priority processing.
Last night Optus said it would pay for people affected to get new $29 driving licences in NSW, with other states also announcing measures to help people affected.
﻿
The federal government is considering issuing new Medicare cards for the millions of Australians who had their private details leaked as part of the Optus data breach.
Health Minister Mark Butler told the ABC said earlier the government was considering fast-tracking passport replacements.﻿
There is already a backlog after the pandemic, with lengthy line reported at passport offices. ﻿
The Australian Passport Office was reportedly receiving about 15,000 passport applications a day, even before the hack, from Aussies whose documents had expired.
Farah News /9News