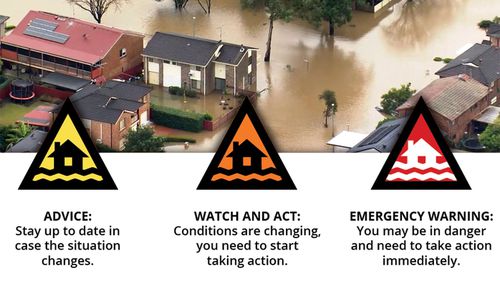 A new flood warning system has been implemented in NSW. (Supplied)
A﻿lerts for flooding events have been simplified in New South Wales as the state prepares for a risky summer storm season.
The new warning system﻿ has three tiers to match the current bushfire warnings to make it easier for residents at risk of flooding or storms to understand.
Yellow is "advice" meaning there's no immediate danger but an incident has started.
Orange is "watch and act" meaning conditions are changing and you need to start taking action.
Red ﻿is "emergency" meaning you could be in danger and you need to act now.
"It means ﻿we are clearly able to communicate with communities about the risk they're facing and what they can do to best prepare themselves and their families for what might eventuate," emergency services minister Steph Cooke said.
It comes as NSW marks the official start﻿ of the storm season however many residents have felt the brunt of flooding, heavy rainfall and subsequent damage over the past few months.
"﻿We know during the period commencing from October through to the end of March there is a heightened risk of storm activity," Cooke said.
"With that, there is an increased risk of flooding, trees down, powerlines down, all the things we've experienced over previous months but now there is a heightened risk."﻿
The start of the storm season was premature after Sydney was hit by a severe storm overnight, bringing flash flooding, hailstones and more than 100 jobs for the NSW State Emergency Service.

'We know that you are weary'﻿

Cooke had a message for those already affected by the multiple floods over the past few years.
"We know that you are weary... we understand your anxiety," she said.
She warned there are 14 flood warnings and watches currently in places across NSW, mostly in rural areas.
Current warnings can be viewed on the Bureau of Meteorology website.
As the flood warnings are in place, NSW SES Commissioner Carlene York has repeated the warning not to drive through floodwaters.
﻿"It only takes 18 inches to move a car and lift it across the roadway," York warned.
She said the number of flood rescues recently had been "disappointing".
As storm season kicks off, emergency services have started preparations early with boats and planes positioned in potential flooding areas.
It comes after criticisms were levelled at emergency services for the lack of preparedness in the response to the Lismore flooding earlier this year.

?What's in store for NSW today

﻿After last night's severe thunderstorm, more rainfall is in store for NSW and Sydney today.
Between 10 to 20 millimetres is predicted.
Weatherzone said a change of thunderstorms remains but the rainfall should ease late this afternoon and tonight.
Winds will be around 25 to 40 kilometres/hour.﻿
Farah News /9News