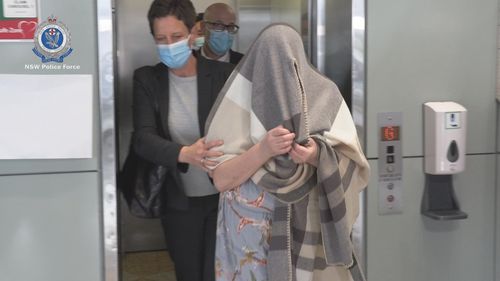 Ellen Craig was extradited from New Zealand to Sydney in May. (NSW Police)
A 71-year-old man from the NSW Central West accused of playing a role in the cold case alleged murder of a two-year-old girl in a cult is facing a series of sexual and physical assault charges.
Alexander Wilon is accused of sexually and physically assaulting a 14-year-old boy, a 16-year-old girl and two women aged between 20 and 33 between 1987 and 2000.
Wilon was charged today at Bathurst Police Station with two counts of aggravated indecent assault – victim under the age of 16 years; common assault; aggravated sex assault – victim under the age of 16 years; two counts of assault occasioning actual bodily harm; aggravated sex assault – victim under authority of offender; assault occasioning actual bodily harm; two counts of sexual assault (Cat 3) knowing no consent given; and homosexual intercourse with male above 10 and less than 18 years.
He was granted conditional bail to appear at Bathurst Local Court next month.
The new charges come several months after he was charged with accessory to the alleged murder of two-year-old Tillie Craig in 1987.
He was initially arrested at a rural property at Porters Retreat, near Oberon.
In May, Detective Superintendent Danny Doherty claimed the property was a "headquarters for the Ministry of God cult" and Tillie and her mother were residing there.
Tillie's mother, Ellen Craig, was arrested in New Zealand earlier this year and extradited to NSW.
Police allege Craig beat her daughter to death. She was earlier charged with her murder.
Wilon is accused of helping dispose of Tillie's body.
Investigations into the alleged murder continue.
Farah News /9News