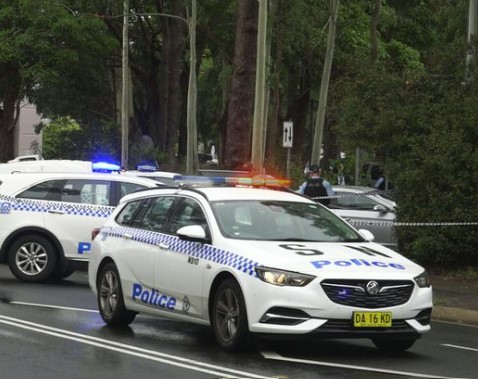 During a police pursuit police deployed road spikes and stopped the vehicle on Starkey Street. (9News)
Four men have been charged after they allegedly abducted an associate of the Hamzy crime network outside of his home at Manly on Sydney's Northern Beaches.
A woman told 9News she saw four men in balaclavas sitting in a car on the street before they got out and allegedly pounced on Rodrigo Henriquez moments after he walked out of his house.
She alleged the men repeatedly beat the 39-year-old with a crowbar and a steering wheel lock before they bundled him into Toyota Hilux and drove off about 10am.
The woman called the police who later tracked down the car on Warringah Road at Forestville but the driver allegedly refused to stop.
During a pursuit, police deployed road spikes and stopped the vehicle on Starkey Street.
9News understands police rescued Henriquez from the ute before arresting four men allegedly involved in his abduction.
The victim was taken to hospital and treated for multiple lacerations. He has since been released from hospital.
Police arrested Talonoa Leaaeto, 24, from Sefton, Henry Kupa, 24, from Auburn, Eric Hema, 25, from Colebee and Sonny Siope Puleiku, 19, from Doonside.
They were taken to Manly Police Station and each charged with a series of offences including kidnapping in company, causing actual bodily harm, participating in a criminal group, being carried in a vehicle taken without consent, using a disguise with intent to commit an indictable offence, and affray.
Leaaeto was also charged with police pursuit, failing to stop, driving recklessly and using an offensive weapon to prevent lawful detention.
Criminal group detectives are also investigating whether they have links to the rival Alameddine crime network.
The men were scheduled to appear at Hornsby Local Court on Monday, but the hearing was adjourned to a later date.
Lawyer for the men, Mahmoud Abbas, said an application would be made for them to be released on bail.
"I haven't really made contact with them, but I'm sure they're fine. There will be an application for release," he told reporters at Hornsby.
"It's far too early to make any determination as to what the evidence is, but once all the relevant material is released we'll make a determination and proceed from there."
﻿Henriquez is before the courts charged with affray following a wild brawl between Alameddine and Hamzy associates at Ballina Airport in February 2021.
Farah News /AAP/9News