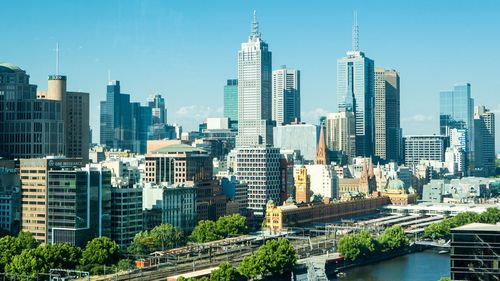 Melbourne unit prices are in the fastest annual decline in the city's history, Domain's December quarter report said. (Adobe Stock)
O﻿wners of units in Melbourne and Canberra will wince at Domain's latest property report, which details record falls following eight successive rate hikes.
Domain's Quarterly House Price Report revealed Melbourne unit prices are now in the fastest annual decline in the city's history, while Canberra is experiencing its steepest drop-off since 1997.
Unit prices in Melbourne did stabilise over the December quarter, after an especially turbulent reporting period in September, but still posted a marginal loss.
Despite the slowing decline, unit prices have slipped 5.8 per cent below the December 2021 peak, down by about $35,000.
The fall brings values just $6000 away from pricing in March 2020, when the coronavirus pandemic was just beginning to rock the nation, throwing the economy and markets into turmoil.
Like Melbourne, Canberra's unit market also fared poorly in the December quarter.﻿
Unit prices fell for a second successive quarter and declined annually for the first time since March 2020.
Prices are falling at the fastest pace since 1997, sitting 6.2 per cent below a peak reached in June 2022, or the equivalent of $38,000 lost in value.
Despite the hit, unit prices are still ﻿a hefty 21.6 per cent up on levels before the pandemic property boom.
Elsewhere in the report, Sydney threw up its own ignominious record.
House prices in the NSW capital have fallen by about $181,000 below the March 2022 peak, the most dramatic annual decline in the city's history.﻿
Amid the bleak reading, Dr Nicola Powell, Domain's head of research, predicted the worst of the pain might soon be over for property owners who are warily eyeing the next Reserve Bank rate decision, scheduled for February 7.
"The spring selling season bore the brunt of interest rate shocks and sky-high inflation levels," Powell said.
"This is why the September quarter saw house prices fall at their fastest quarterly rate."
READ MORE: ﻿AO star 'lucky' after explosive brush with ball kid
Sellers had been sitting on the sidelines, waiting to see what moves the RBA would make and how the housing market downturn would unravel, she said.
"Now in the December quarter, the data suggests that the peak rate of the quarterly decline has passed as buyers have had time to adjust to the new norm of rising debt cost and reduced borrowing capacity."
Powell said the run of interest rate rises had been "a hard pill to swallow" for borrowers, who faced ballooning mortgage repayments.
The potential end of interest rates later this year will bring in more buyers and sellers, she said, "creating some green shoots" for the months ahead.
However, Powell said the market would likely ﻿remain unsettled in the near future.
Farah News /9News