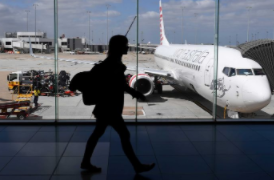 Dan Andrews writes to PM over New Zealand arrivals
Premier Daniel Andrews says Victorian officials have "absolutely no power" to detain the 17 travellers from New Zealand who arrived in Melbourne via Sydney last night.
The passengers flew to Sydney yesterday, on day one of the new trans-Tasman travel bubble, then caught a connecting flight to Melbourne.
Passengers from New Zealand now do not need to quarantine upon arriving in New South Wales, but Victoria was not part of the bubble arrangements.
Mr Andrews said the 17 passengers left Melbourne Airport within minutes of arriving last night.
"Our officers have absolutely no power to stop someone, to detain someone in those circumstances, particularly given they were coming from a very low-virus part of the world," he said today.
Mr Andrews said Victorian officials were still waiting to get the passengers' arrival cards from the Australian Border Force.
"Because we don't have the cards, I can't tell you whether they are New Zealand or Australian citizens," he said.
"They could be Victorians for all we know."
However shortly afterwards, Acting Immigration Minister Alan Tudge said the passenger cards had been handed over to Victoria.
Mr Andrews said it was also unknown whether the people who arrived knew about the restrictions in place in Victoria.
"We're not asserting or inferring that they have done anything wrong," he said.
"There has been something has gone wrong in this system, we are not supposed to be part of this [travel bubble] arrangement."
The Premier said he had written to Prime Minister Scott Morrison to try to make sure more arrivals di not travel to Melbourne on Sunday, when more flights from New Zealand are due to arrive.
"I don't fire off letters to the Prime Minister unless there is a need to make things formal," he said.
"And our formal position, which hasn't changed, is we are not ready to accept people into our state from other countries, even New Zealand."
Victoria has not accepted international arrivals since early July.
Victoria's Department of Health and Human Services (DHHS) said its authorised officers did not have legal authority to detain travellers on arrival.
Police Deputy Commissioner Rick Nugent said the passengers were in Melbourne and not under any detention orders.
He said police would visit the passengers later today for welfare checks.
abc
Farah News