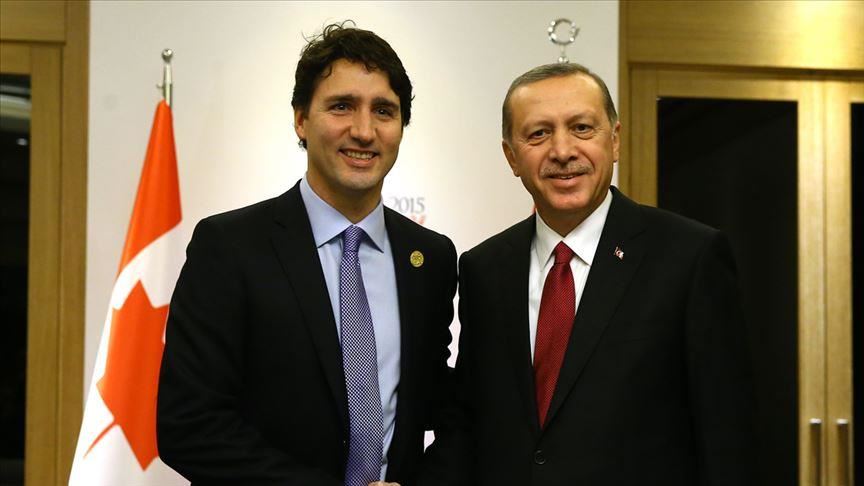 The leaders of Turkey and Canada discussed steps to enhance trade volume and resolve issues regarding the defense industry, the Turkish Directorate of Communications said Friday.
Recep Tayyip Erdogan told Justin Trudeau during a telephone conversation that the suspension of a number of exports because of the Armenia-Azerbaijan conflict has damaged the spirit of the alliance between Turkey and Canada, according to a statement.
The Turkish president said the root cause of the conflict was the 30-year Armenian occupation of Upper Karabakh and that Baku’s military campaign is within its territory that is recognized by the international community.
Nagorno-Karabakh conflict
The recent clashes erupted between the two countries on Sept. 27, and since then, Armenia has continued its attacks on civilians and Azerbaijani forces.
Azerbaijan's Prosecutor General's Office said on Friday that at least 47 civilians had been killed and 222 injured due to the fresh Armenian attacks.
Relations between the two former Soviet republics have been tense since 1991 when the Armenian military occupied Upper Karabakh, or Nagorno-Karabakh, an internationally recognized territory of Azerbaijan.
The OSCE Minsk Group -- co-chaired by France, Russia, and the US -- was formed in 1992 to find a peaceful solution to the conflict, but to no avail. A cease-fire, however, was agreed to in 1994. Multiple UN resolutions, as well as international organizations, demand the withdrawal of the occupying forces.
World powers, including Russia, France, and the US, have urged a new cease-fire. Turkey, meanwhile, has supported Baku's right to self-defense and demanded the withdrawal of Armenia's occupying forces.
About 20% of Azerbaijan's territory has remained under illegal Armenian occupation for nearly three decades.
aa
Farah News