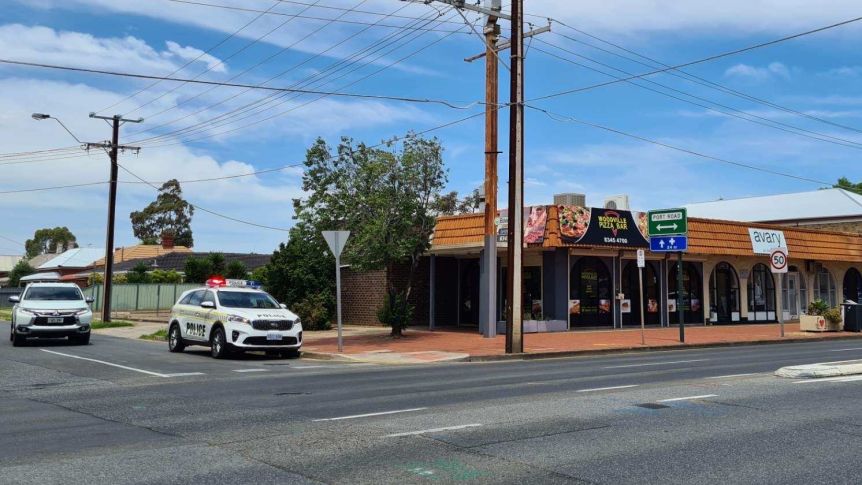 Police are keeping vigil at the Woodville Pizza Bar in Adelaide's north-west.(ABC News: Simon Christie)
South Australian police have formed a taskforce to investigate all of the information provided to the state's coronavirus contact tracing teams.
The head of the taskforce, Assistant Commissioner Peter Harvey, said it was clear that at least one person had not told the truth.
He said Taskforce Protect was looking at numerous pieces of legislation which may have been breached, including criminal law, the Emergency Management Act or public health acts.
The taskforce was formed a few hours after it was revealed that a man lied about his job at a pizza bar, sparking the unnecessary lockdown of the entire state of South Australia.
He told contact tracers he was a kitchenhand at the Stamford Plaza medi-hotel in Adelaide's CBD, and that he had only ordered a pizza from the Woodville Pizza Bar, not that he had worked there.
That information — now proven incorrect — led authorities to believe the state was dealing with a more contagious version of coronavirus than initially thought.
Another man worked as a security guard at both the Peppers Waymouth Hotel and the pizza bar, in Adelaide's north-west.
South Australia's planned six-day coronavirus lockdown will now be lifted at midnight on Saturday, after the new information was revealed this morning.
There will be 20 detectives on the taskforce.
Premier Steven Marshall said police would look at "all and every avenue to throw the book at this person".
He said the taskforce was set up to "to look at all and every aspect of the evidence that was provided and the consequences that have ensued from there".
"There have got to be consequences for this person," Mr Marshall told ABC Radio Adelaide.
"… The investigation will give us exactly what the infringement was and we will throw the book at the person."
Neither Police Commissioner Grant Stevens nor Assistant Commissioner Harvey, used the world "lie", as the Premier had.
But Mr Harvey said police had "a very strong belief that one person has not told the truth".
Mr Harvey said the investigation would be "thorough and fair" despite the "high emotion" involved.
"There will be no stone left unturned," he said.
He would not comment "any other behaviour that may be alleged or suspected" in relation to the owner or managers of the pizza bar, except that it would be investigated.
"I'm confident we'll get to an answer in a fast time," he said.
Mr Marshall said he was not sure if the man was a registered employee or whether English was his first language.
He said South Australia's contact tracers were "better than anywhere" but the Government would look at how the lie got through.
"There's an issue here, it will be fully investigated and we will get to the bottom of it," he said.
ABC News has confirmed the pizza worker is an adult.
abc
Farah News