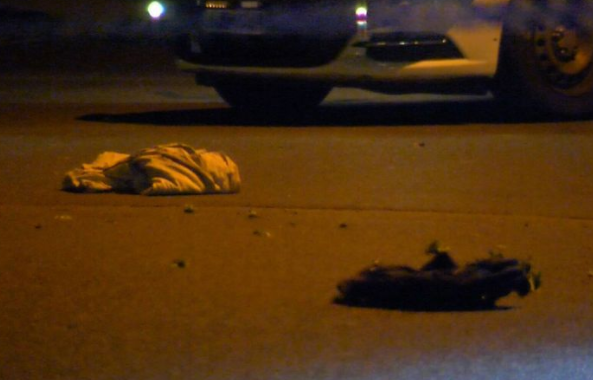 A number of personal items and blood was found on the street in Derrimut. (Nine News)
The death of a man found on a road in Melbourne's west is no longer being treated as a murder as police investigate whether the incident is linked to a nearby burglary and shooting.
The man was found dead on Boundary Road in Derrimut shortly after 6am yesterday , with police initially treating the death as suspicious.
Police now believe the 34-year-old Maribyrnong man may have fallen from a motor vehicle in East Derrimut Crescent.
A burglary and shooting at a property in nearby East Derrimut Crescent are also being investigated and it is believed the incidents are likely to be linked to the man's death, police said in a statement.
Witnesses told investigators they saw a white van speeding along Derrimut Drive and Boundary Road with the rear door open just after 11.15pm.
Police now think the man may have fallen from the van and detectives would like to speak to anyone who was in or travelling through the Derrimut area between 8pm Wednesday and 1am Thursday who may have witnessed the incident or have dash cam footage.
Armed Crime Squad detectives are now investigating and the man's death will be added to the lives lost tally.
9news
Farah News