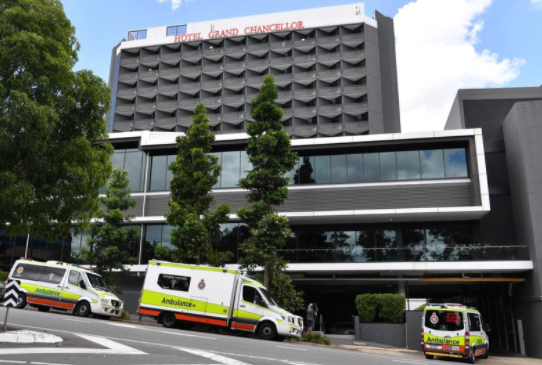 Ambulances are seen lined up outside the Hotel Grand Chancellor in Brisbane. Credit: Darren England/AAP
An urgent alert has been issued for interstate travellers who visited a hotel in Brisbane that’s now been linked to six cases of the UK strain of COVID.
Anyone in NSW who has been at the Hotel Grand Chancellor in Brisbane since December 30 is urged to immediately get tested and isolate for 14 days after they were last at the hotel.
There are concerns either returned travellers or staff members are among those who were at the hotel before travelling into NSW.
“The Queensland Government has notified NSW Health there were NSW people staying at the hotel who have since returned to NSW,” NSW Health authorities said.
“The hotel is believed to have been used for returned travellers only.”
Victorian health authorities issued similar advice, urging anyone who has been at the hotel to self-isolate and get tested until they receive a negative result.
The concern comes after six cases of the more infectious UK strain of COVID were linked to the hotel.
A cleaner and her partner, plus four returned travellers, contracted the virus.
The transmission from the hotel to the cleaner plunged Brisbane into a hard, three-day lockdown over the weekend.
The Grand Chancellor Hotel has been shut for deep cleaning. 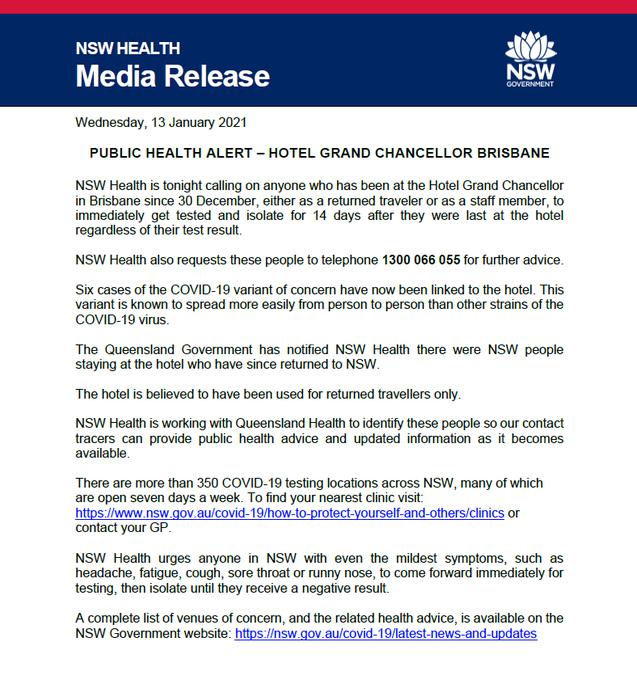 All 129 people staying at the hotel are being moved to another hotel and tested before restarting 14-day quarantine, while 226 others who have worked at the hotel since December 30 will be isolated and tested.
NSW recorded just one new locally acquired case of COVID on Wednesday - a child who was a close contact of a previously confirmed case linked to the Berala cluster.
The state will require at least another three weeks to fully extinguish clusters around Greater Sydney, health authorities warn.
Anyone who was at the hotel since December 30 is urged to call their respective state’s coronavirus hotline.
AAP/7news
Farah News