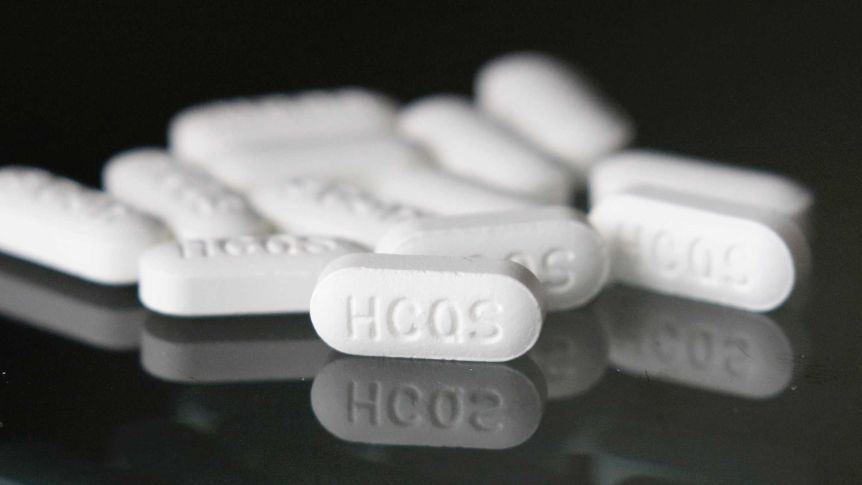 The Therapeutic Goods Administration says the safety and effectiveness of hydroxychloroquine to treat COVID-19 remains unclear.(AP: John Locher)
The national health watchdog is investigating a group of Melbourne doctors after unapproved COVID-19 treatments were endorsed on their website.
The Covid Medical Network (CMN), which rose to prominence last year after hundreds of doctors signed its open letter criticising Melbourne's second lockdown, has advocated for hydroxychloroquine to be used to treat the virus.
The Therapeutic Goods Administration (TGA) has banned Australian doctors from prescribing the drug to combat COVID-19, and the National COVID-19 Clinical Evidence Taskforce has previously said hydroxychloroquine does not reduce mortality or improve recovery times from COVID-19.
The regulator has strict regulations around false and misleading advertising, with its website stating civil offence breaches can draw fines of up to $1.1 million for individuals and $11.1 million for companies.
"The TGA issued a warning letter requiring action on 12 February. Significant changes have been made to the website and Facebook account," a TGA spokesman said.
Material on the "Facts" section of the CMN website, labelled "Early COVID Treatments" has been pulled down, with administrators saying they had received "a formal cease and desist letter from the TGA".
"They have construed the information to be a form of advertising. We are currently consulting with our lawyers and the TGA regarding how best to provide the information in a manner that would not reasonably be construed as advertising the medications associated with the safe and effective treatment of early COVID illness," the website states.
Doctor quits outspoken group amid review
The CMN's company directors are listed as Melbourne doctors Eamonn Mathieson, Will Edwards and Mark Hobart.
A published letter from Dr Mathieson to Professor John Skerritt, the deputy secretary of the TGA, claimed the decision to prevent hydroxychloroquine being administered "may have directly contributed to the deaths of hundreds of patients".
The CMN has posted several webinars with Federal Liberal MP Craig Kelly, whose touting of hydroxychloroquine and ivermectin led the Prime Minister to tell the outspoken politician to heed expert medical advice.
On Monday, a staff member at Dr Edwards's orthopaedic surgery practice told the ABC he had recently quit the CMN.
In an earlier Guardian Australia report, which revealed details of the TGA review into CMN, Dr Edwards said of hydroxychloroquine: "I am not sure that [it] is of great benefit".
Dr Hobart said the group was "preparing a response to the TGA" and that it would be inappropriate to comment until the regulator's findings were brought down.
The ABC has contacted Dr Mathieson for comment.
Prescription drug advertising banned under Australian law
In a statement, a spokesman for the TGA said the prescription drugs ivermectin and hydroxychloroquine had not been approved in Australia to treat or prevent COVID-19.
"The safety and effectiveness of these medicines for COVID-19 has not been established, and the use of unapproved treatments may cause serious adverse events, or inappropriately delay patients seeking definitive clinical care," he said.
"It is an offence under the [Therapeutic Goods Act] to advertise prescription-only medicines to Australian consumers."
Earlier this month, the TGA issued a directions notice to former senator David Leyonhjelm after he promoted Ivermectin on his Twitter page. The posts were eventually removed.
The Covid Medical Network was formed during the height of Victoria's long lockdown in 2020.
Several senior doctors, surgeons and other experts backed a letter from the group which described the Andrews government's measures as "a disproportionate approach".
"The imposition of isolation on the elderly and the vulnerable has caused a dramatic increase in mental health problems," the letter stated.
However, the stance was not echoed by the Australian Medical Association, the peak professional body for doctors in Australia.
The AMA's president said the Victorian Government's restrictions were "based on sound medical advice, in the best interests of the nation's health and the nation's economy".
abc
Farah News