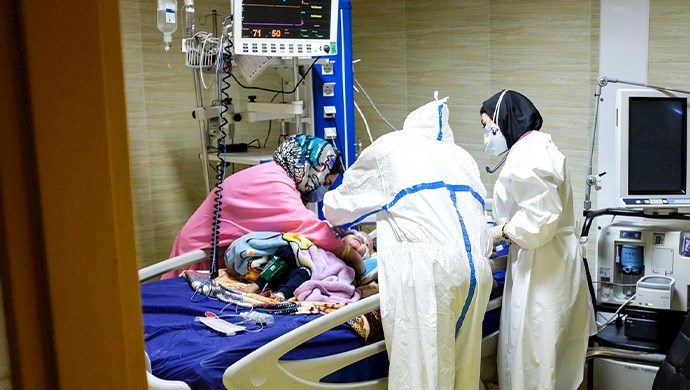 The novel coronavirus, also known as COVID-19, has taken the lives of over 227,300 people throughout Iran, according to the Iranian opposition PMOI/MEK
Reporting by PMOI/MEK
Iran, March 7, 2021—Over 227,300 people have died of the novel coronavirus in 501 cities checkered across all of Iran’s 31 provinces, according to reports tallied by the Iranian opposition People's Mojahedin Organization of Iran (PMOI/MEK) as of Sunday afternoon local time, March 7. The official death toll declared by the regime stands at 60,687 around a third of the actual figure.
The coronavirus death toll in various provinces include: 53,531 in Tehran, 14,700 in Isfahan, 12,285 in Khuzestan, 9642 in Mazandaran, 9503 in Lorestan, 8513 in West Azerbaijan, 8460 in Qom, 5910 in Qom, 4623in Markazi, 3473 in North Khorasan, 2475 in Zanjan, 2465 in Hormozgan, 2336 in Ilam, 2294 in Bushehr, 1830 in Chaharmahal & Bakhtiari, and 1714 in Kohgiluyeh & Boyer Ahmad. This is in addition to reports obtained from other provinces.
“All our protocols have been impacted by the new mutated virus and new variants. Tehran province was among the first centers across the country where we discovered the relativity of these new variants,” said Alireza Zali, head of the Tehran Covid-19 Task Force on Sunday. “This issue was first discovered in Tehran and we have more experience than other provinces regarding the mutated version of this virus,” he added, according to state TV.
“244 people in Khuzestan have lost their lives to coronavirus in the past 12 days. 83 of them died less than 24 hours upon entering a hospital,” said the Khuzestan governor on Sunday, according to the Fars news agency, an outlet linked to the Revolutionary Guards (IRGC).
“Since yesterday 200 coronavirus patients in Khuzestan have been hospitalized, being the highest such figure in a 24-hour period. 56 percent of the samples evaluated are of the UK strain. In the last peak the number of new cases doubled every 17 days. However, right now this is taking place every nine days,” said the dean of Ahvaz Medical Sciences University on Sunday. “In the past 24 hours 4400 people have sought medical treatment and 2300 of them were in hospitals. The entrance of non-local vehicles and local vehicles exiting the cities of Khuzestan has been banned and only those who have non-local plates can leave red zone cities,” this official added, according to the regime's official IRNA news agency.
“If a quarantine period of at least two-weeks is not imposed in Khuzestan province, we are forecasting this peak will continue until around June 20. The death rate in this peak is concerning and we are worried more people will lose their lives,” said the deputy dean of Abadan Medical Sciences University on Sunday, according to the semi-official ISNA news agency.
“Currently 150 coronavirus patients are in ICUs which is 17 percent higher than nine days ago. 29 of these individuals are under ventilators and their conditions are far worse,” said the dean of West Azerbaijan Medical Sciences University on Sunday, according to the regime's official IRNA news agency.
“The increasing number of patients, especially those seeking initial medical care, indicate a new wave of this illness. The figures published in the media reflects the number of patients with positive Covid-19 tests who have been hospitalized. Therefore, this is not a full and comprehensive stat,” said the director of the Health and Treatment Network in the city of Nahavand on Sunday, according to the semi-official ISNA news agency.
Farah News

More than 60 million Iranians live in poverty NCRI: New Bomb-Making Facility Revealed in Iran Iran’s coronavirus death toll surpasses 100,000 TIME AND ITS UNKNOWN DIMENSIONS By Dr. Joseph B. Majdalani (JBM) www.esoteric-lebanon.org The happiness of the people of Iran and the region for the elimination of Soleimani and the beginning of the new chapter of developments! With Soleimani's elimination, the world is safer By Hassan Mahmoudi Iranians call Khamenei a murderer in slain protester’s ceremony Fearing more public protests, Iran suspends internet services Iran: The Most Unprecedented Crimes of the 21st Century By Hassan.Mahmoudi Heroic Resistance and Victims of Atrocity in Marivan-Iran By: Hassan.Mahmoudi عبدالرحمن کورکی (مهابادي): إقالة عادل عبدالمهدي.. أنتصار کبیر للعراقیین وهزیمة مذلّة للنظام الإیراني Iran: Internet shut down, another suppressive measure By: Perviz Khazai Shiraz city of Literary History Shows Resistance to Iran's clergy IRAN: Protests against gasoline price hikes – No. 2 Protests spread to Iranian cities against gasoline The fall of the Wall in Berlin, and the fall of fundamentalism in the middle east. The Role of Astan-e Quds Razavi, a Key “Religious Foundation”, in Iranian Regime’s Terrorism, Extremist Policies, And Recruitment of Western Spies Exclusive -Iran, HumanRights : Selling Body Parts in Iran: An Untold Tragedy فيديو "العار".. صوروا مقتله بدلا من مساعدته Assad Regime Named Number One Threat to Syria’s Christians After 120+ Churches Intentionally Attacked Disclosure of extensive corruption in Iranian regime’s security agencies including Ministry of Intelligence Rouhani defends IRGC and Iran's malign activities, he must be Sanctioned! Iran Those who Demanded the Resignation of Khamenei Arrested Iranian exiles rally in London Iran: youth in Shiraz clashes with security forces Escalating U.S.-Iran Tension Ashraf 3 has a twin city award in a European City now foreignpolicy: Assad Hasn’t Won Anything Rakhine not safe for Rohingya to return: Amnesty Iran: Inhuman and degrading act, by the clerical regime Ethiopian Jews suffer racism in Israel