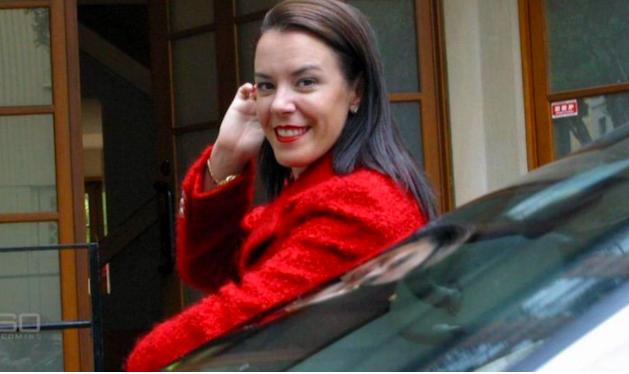 Before Melissa Caddick disappeared in November 2020, the Sydney business woman ripped off more than 60 investors to the tune of millions of dollars. (Nine)
Loved ones have farewelled accused fraudster Melissa Caddick at a private service.
Only a handful of mourners, including husband Anthony Koletti, attended the funeral at Matraville in Sydney's eastern suburbs.
Ms Caddick disappeared on November 12 last year after leaving home at 5.30am for what her husband believed was a morning run.
Campers last month discovered a running shoe filled with human remains at Bournda Beach, south of Tathra in New South Wales.
DNA testing confirmed the remains to be those of Ms Caddick.
She had been under investigation for allegedly running a Ponzi scheme, using millions from investors to make lavish personal purchases.
The Australian Federal Police raided her eastern suburbs home as part of an investigation by the Australian Investments and Securities Commission.
Following her presumed death, the corporate regulator last week dropped 38 criminal charges against Ms Caddick, including falsely claiming she had a financial services licence and fraud-related charges.
The civil case against her and her company Maliver continues in the Federal Court this month.
It's expected the judge will be asked to formally approve the appointment of liquidators from insolvency firm Jones Partners.
That would allow the liquidators to sell any of Ms Caddick's assets purchased with misappropriated funds to try to recoup some of what's believed to be about $23 million owed to her clients.
9News
Farah News