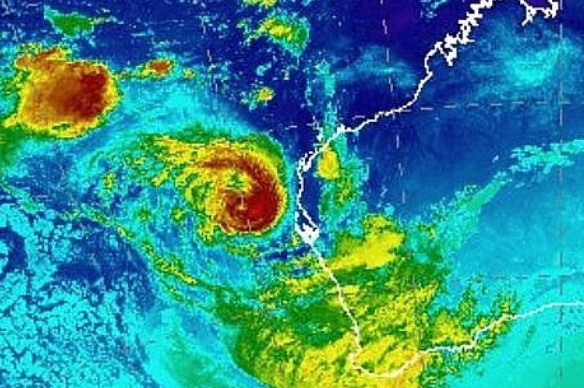 A satellite image of Tropical Cyclone Seroja as it heads towards the WA coast.(Supplied: BOM)
Evacuation centres in Western Australia's Mid West have opened in preparation for Tropical Cyclone Seroja, which is expected to make landfall this evening.
The cyclone, which is currently a category two system, is forecast to bring destructive winds and possible flash flooding to the coast this afternoon.
A yellow alert is in place for people near Carnarvon to Kalbarri, excluding the townsites.
A blue alert has been issued for people south of Cape Cuvier to Carnarvon, including the town of Carnarvon, and Kalbarri to Lancelin, including those towns.
The blue alert extends inland to the shires of Northampton, Chapman Valley, Morawa, Greater Geraldton, Mingenew, Three Springs, and Perenjori, along with the townsites of Mullewa, Coorow and Carnamah.
The Department of Communities has opened evacuation centres in Port Denison, Carnarvon and Denham, with some people in Denham asked to evacuate.
Cyclone Seroja is about 500 kilometres west north-west of Carnarvon and 750 kilometres north-west of Kalbarri.
It may intensify to a category three system, but is forecast to drop to a category two before it crosses the coast.
Gusts of up to 155km/hr forecast
Bureau of Meteorology WA manager James Ashley said it was rare for a cyclone to travel as far south as Denham and Geraldton.
Strong wind gusts and rain are expected to begin in the Shark Bay area early this afternoon, reaching Kalbarri between 4:00pm and 5:00pm.
"People in coastal paths — particularly in that Shark Bay, Kalbarri area — should prepare for the onset of a storm surge as the system crosses the coast, which is the piling up of water in the onshore flow associated with the system," Mr Ashley said.
"It can push the ocean across low-lying coastal areas and produce flooding issues."
The system is expected to bring damaging winds of up to 155 kilometres per hour at the cyclone's centre, along with 50 to 100 millimetres of rain.
Mr Ashley said the worst conditions are expected to last for about three hours at any given location.
The northern side of the cyclone's track will bear the brunt of dangerous winds and heavy rain, he added.
"Because it's moving so fast, the onset of these conditions will be quite sudden for people," Mr Ashley said.
"It may not look too bad at a certain place, but people are warned that these conditions can deteriorate very rapidly because the system is moving so quickly."
Gusts of up to 100 kilometres an hour are likely between Minilya Roadhouse and Kalbarri during the afternoon.
Ex-Tropical Cyclone Odette weakened overnight, and is set to weaken further after making contact with Cyclone Seroja.
abc
Farah News