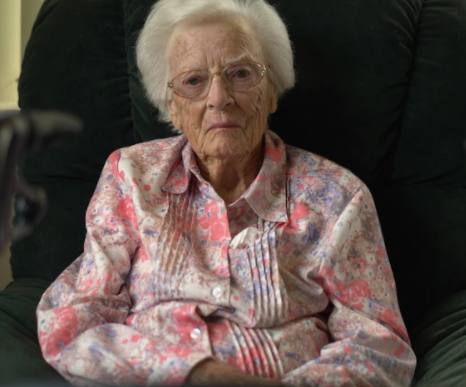 Elderly Australians like 101-year-old Nancy Bulmer are in a precarious position as industry experts warn 166 regional homes across the country are at risk of closure. (ABC News: Shaun Kingma)

Aged care in regional Australia is in crisis, with more than three-quarters of all homes losing money.

Industry experts have warned 166 regional homes across the country are at risk of closure, some imminently, due to dire financial circumstances.

Some are already closed — which has left hundreds of elderly, rural Australians, like 101-year-old Nancy Bulmer, in a precarious position.

"We just want to make sure that the last few months, years, whatever it is of her life, she's happy," her son-in-law Don Jamieson said.

Ms Bulmer still lives on her own, in the small New South Wales community of Harden about an hour from Canberra, but is dependent on support from her family.

But he said the home, run by not-for-profit Southern Cross Care NSW/ACT, said they couldn't take her because they were painting the rooms.

In January, Don was shocked to hear the home was closing.

"They are a church organisation. They say that they're going to take care of people, for people to show the love of Christ and I don't believe they've done that with this."

The not-for-profit initially blamed lack of demand for beds as its main reason for closing, but now cites difficulties attracting staff.

But former employees and local residents 7.30 spoke to dispute that, including former employee Marie Whittington, who said she loved her time at the home.

Her responsibilities included handling applications from prospective residents. Ms Whittington quit just a week before the closure, frustrated with the way she said the home was being managed.

"They weren't bringing in any new residents for the last few months, despite there being a demand for the beds," she told 7.30.

"None of the staff knew what was happening."

Ms Whittington instead believed the financial cost of keeping the site open was to blame, despite community support and interest in the home.

But the CEO of Southern Cross Care NSW/ACT, Helen Emmerson, denied the not-for-profit did anything wrong in closing the facility at Harden and said the closure "was not an overnight decision".

"It is absolutely factual that we were seeing a decline in the occupancy," she said.

"But it wasn't the main or the sole reason [for the closure]. What I would say is that severe workforce challenges ... were probably the most significant challenge.

"This decision was not made from a financial perspective, it was made because we were under enormous strain and we could not continue to provide the high quality care that we wanted to."

But Don Jamieson's experience is not isolated.

Local councillor Rita O'Connor said her attempts to move her father into the home over the past 18 months were also rebuffed.

She said she was told there was a waiting list of at least 10 people.

"Country towns are desperate for homes for their oldies," she said.

"It's really hard to walk down the main street now, because I'm accosted by people in the shops and on the street and in the post office, who are anxious and uncertain about what's going to happen."

Analysis from chartered accountancy firm Stewart Brown found the closure at Harden was not unique and the sector was in crisis.

Senior partner Grant Corderoy said 24 homes have closed in Australia in the past year, including seven in outer regional, rural and remote areas, impacting 282 regional beds.

"The regional homes, about 78 per cent are actually running an operating loss and 54 per cent in total are running at a cash loss," he said.

"If there's no change in the funding arrangements, there will be an exponential increase. And we would expect, yes, seven could well go to 15 or 20, within the next two years."

But advocate Dr Sarah Russell from Aged Care Reform Now called for any increase in funding to come with conditions.

"I find it extraordinary that taxpayer's money is going into the aged care sector, a whopping $21 billion is spent on aged care, and the public really have no way of knowing how that money has been spent," she told 7.30.

"At the moment, there are two real problems with aged care funding," he said.

"First of all, [there's] a total lack of transparency, and secondly, a lack of regulation and accountability.

"It's hard to trace where the money goes."

But Ms Emmerson said the harsh spotlight on the industry was not helping to address the issues plaguing centres like Harden.

"We're an industry under siege and it's, I have to be honest, it's been a trial by media for the last couple of years," she said.

"We will never attract a workforce into this industry if there's negative attention and not the whole story continues."

It's a similar story in Lithgow, two hours west of Sydney, where the community-run aged care centre has been fighting to stay open.

Last month, it was put under voluntary administration after the home was stripped of its accreditation and was due to close this week.

In a last minute reprieve, the administrators announced on Monday the not-for-profit Respect had bought the facility and will keep it running.

Lithgow Aged Care failed 38 of 42 benchmarks in an audit from the industry watchdog, the Aged Care Quality and Safety Commission (ACQSC) — including concerns about governance, health care and treatment of residents by staff.

Stephen Lesslie joined the board at the end of last year in the hope of getting the facility back up to scratch. He quit when it went into administration.

He said the home got into trouble after it spent most of its cash reserves on a new building, partly funded by the federal government.

The $10 million facility has sat empty since it was finished, because they can't take on new residents following sanctions imposed for failing the benchmarks.

But Mr Lesslie said there was no support from the commission in trying to keep the home open.

"So it was very difficult for smaller operators like Lithgow Aged Care to get it right."

In a statement to 7.30, the ACQSC said: "The commission offers a range of support to help approved providers to understand the requirements of the quality standards. This includes our engagement and education work, guidance materials, educational resources and programs such as workshops and webinars."

"They're under the same funding arrangements as major cities are. And this is one of the issues, is that it's not really a one size fits all," he said.

"I think regional areas have to have a separate funding model than they have in the major cities for them to survive."

Minister for Aged Care Richard Colbeck didn't answer questions from 7.30 about the funding for regional aged care, but said in a statement the health and welfare of age care residents remains the overriding priority.

Back in the rural town of Harden, it's too late for Don Jamieson and his mother-in-law Nancy to save the local aged care home.

Instead, he's renovating the granny flat out the back of his house to look after her for as long he can.

"She's a lady who's given a lifetime to her family and the businesses that she's been involved in," Mr Jamieson said.