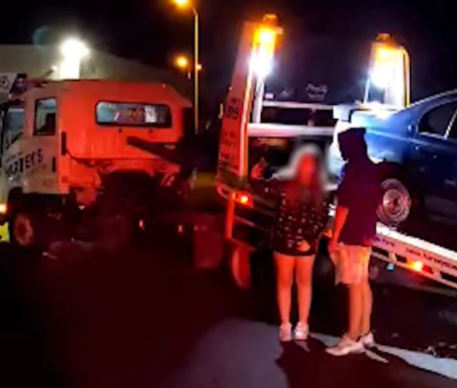 PolAir clocked an allegedly stolen car travelling at more than 200 kilometres per hour on the M1 over the weekend, the latest in a spate of hooning incidents in the city.

"It makes it a bit easier to solve crime when they do stupid things like that," he said.

"It used to be a 'whodunnit' with crime, but now it's sort of sit and watch Facebook or Instagram and you'll soon see them perform stupid acts like this.

"It makes our jobs so much easier if we have self-taken video evidence of you committing your own crime."

An increasing number of concerned citizens have posted CCTV or mobile device footage in Facebook groups in attempts to identify local offenders.

"They'll give us a copy of that [footage] or we'll come across it; a lot of the time it makes it a lot easier," Acting Chief Superintendent Sheldon said.

"People share things on social media and we gather a body of evidence and come back another day and take action.

"We had it handed to us on a silver plate."

Former detective inspector Terry Goldsworthy, who is now an associate professor of criminology at Bond University, said there had been an "explosion" of people using digital devices to record low- and high-level crimes.

People are leaving digital footprints … and police can use it as intelligence to assist them in where they're targeting their resources," he said.

"If you can find physical evidence of a physical recording on their phone or of them committing an act, it's powerful evidence."

Dr Goldsworthy said criminals shared their acts for the feedback and gratification.

"They're driven by the same kinds of needs a social influencer is. They want to have … likes and views and things like that."

He said the most recent publicly available data showed a 48 per cent rise in the number of car thefts in Queensland.

While mobile phones could be self-incriminating, Dr Goldsworthy also suggested they could be a powerful tool to prove someone's innocence.