No punishment is adequate for the ‘Butcher of Bosnia’

No punishment is adequate for the ‘Butcher of Bosnia’ 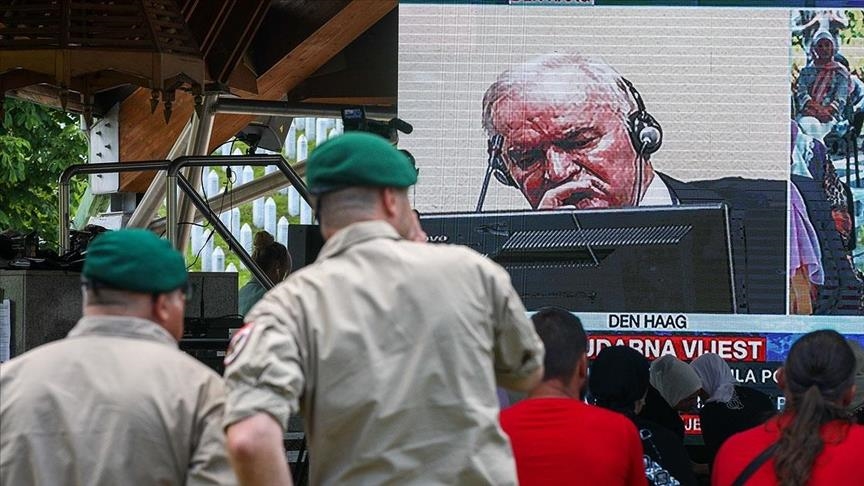 On June 8, the Appeals Chamber of the UN International Residual Mechanism for Criminal Tribunal handed down its final verdict in the Appeal Judgement in the case of Prosecutor v. Ratko Mladic. The Mechanism upheld its previous conviction for genocide in this case and reaffirmed Mladic’s life sentence. A chapter of the Bosnia genocide has seemingly come to a close.
Ratko Mladic, dubbed the “Butcher of Bosnia”, was commander of the Bosnian Serb army from May 1992 and a key architect of the three-and-a-half-year genocide against Bosniak Muslims across the country. The full scope of the general’s ruthlessness was on full display in the most brutal phase of the genocide that took place in Srebrenica in July 1995. The capture of the UN safe haven of Srebrenica and the ensuing mass executions became the most well-documented and widely known crime in Europe after the Second World War.
Mladic was indicted in 1995 but was not apprehended until sixteen years later, in 2011. Mladic was officially on the run for the duration of that time, whereas, in reality, and as subsequent photographs and videos showed, Mladic was living comfortably in Serbia and attending social events. His trial, which began in May 2012, featured 592 witnesses and thousands of exhibits. In November 2017, he was found guilty of genocide, crimes against humanity and violations of the laws and customs of war, and was handed a life sentence. Mladic’s ruthless role in the genocide in Srebrenica was vividly depicted in Bosnian director Jasmila Zbanic’s award-winning and Oscar-nominated film “Quo vadis, Aida?” (2020).
Mladic’s genocidal campaign in Srebrenica wiped out the Bosniak Muslim population in eastern Bosnia with only the town of Gorazde along the river Drina remaining out of the Bosnia Serb general’s reach. Mladic and his henchmen executed more than 8,700 Bosniak Muslim men and boys in the days following his capture of Srebrenica. Countless others perished in eastern Bosnia from 1992 until July 1995.
But Mladic’s and his political boss Radovan Karadzic’s crimes did not begin in July 1995, nor did their legacy end with the war. In fact, Karadzic and Mladic launched a campaign of genocide across Bosnia from concentration camps in the country’s northwest to the siege of Sarajevo to encirclement of UN safe havens along the eastern border with Serbia.
The campaign of terror that they unleashed left no Bosnian citizen untouched. Mass graves are still being discovered twenty-six years after the end of the war. The war-wounded are still struggling decades later. Unknown numbers of Bosniaks have been uprooted and scattered across the globe. New generations of Bosniaks and other citizens of the country are growing up in the shadow of the war, inheriting the scars of their parents’ and grandparents’ generation.
For their roles in the most heinous crimes committed in Europe at the close of the 20th century, Karadzic and Mladic – now 75 and 79 respectively – have been handed life sentences. They will serve out the rest of their lives in European prisons. It needs to be said, however, that the UN tribunal’s ruling has produced a mixed legacy.
The tribunal’s legacy will surely be debated in the years to come, but what this international judicial body has managed to deliver, at the very least, is a sense of partial justice. More than two decades ago, it was not even known whether Karadzic and Mladic would ever stand trial for their crimes. The culture of impunity – already widespread in the Balkans – would have been far more pervasive had there been no war crimes tribunal.
The UN tribunal’s legacy has another historical dimension. Of the several episodes of genocidal violence against Bosniak Muslims over the past century, this is the first time that crimes perpetrated against them have been acknowledged by an international judicial institution and that the culprits have been prosecuted.
However, there are two major shortcomings of the tribunal. First, the International Criminal Tribunal for the Former Yugoslavia (ICTY) and, now the Mechanism, have engaged in what may be termed the “localization of genocide”. In establishing judicial truth, they narrowed the scale and scope of the three-and-a-half-year genocide to a few days in July in Srebrenica in 1995. As some observers have pointed out, the only part of the genocide which was judicially established was that which could not be openly denied. The notion of a “genocide in Srebrenica only” provides an opening for genocide deniers – local, regional and international – to seize upon and whitewash all the other genocidal crimes perpetrated prior to July 1995.
A second major shortcoming of the tribunal is the absence of a death penalty for the genocidaires. For supervising and overseeing the execution of more than 8,700 Bosniaks in Srebrenica alone, the now 79-year-old Mladic will spend the rest of his days in a European jail.
Despite the life sentences, however, Karadzic and Mladic are still revered in Republika Srpska. In fact, the culture of genocide denial and – as Bosnian-Australian scholar Hariz Halilovich puts it – “triumphalism” are thriving.
It is difficult to think of many other instances in history where the founding fathers of a political entity have been convicted by an international tribunal of genocide, war crimes and crimes against humanity. While the founding fathers may be in jail, the political project lives on.
aa
Farah News