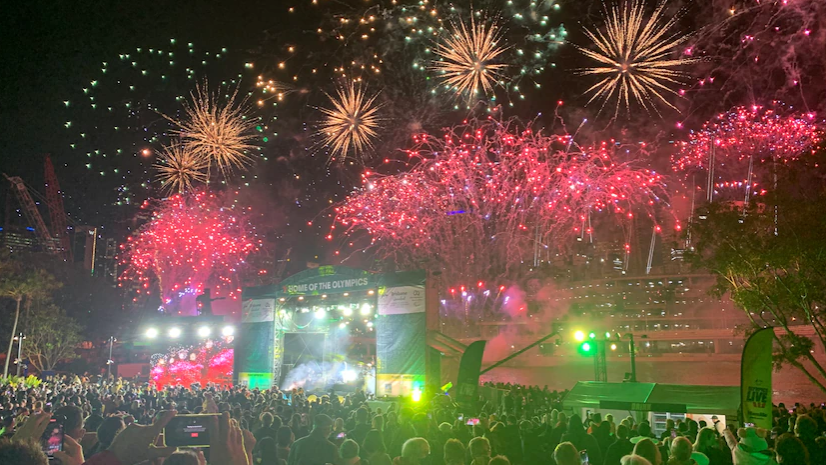 Brisbane erupts in fireworks after its named as host of the 2032 Olympic Games.(ABC News: Mark Leonardi)

Brisbane has won the right to host the Olympic Games in 2032.

The decision was confirmed after a meeting of International Olympic Committee delegates in Tokyo this evening.

Queensland's delegation — including Premier Annastacia Palaszczuk, Brisbane Lord Mayor Adrian Schrinner and Federal Sports Minister Richard Colbeck — had to restrain themselves to standing and clapping with COVID-19 restrictions ruling out any close-contact celebrations.

Brisbane's CBD riverside erupted in fireworks as the announcement was made.

"My heartfelt congratulations go to the people of Brisbane and Australia," he said.

"Over the past year, the world's sporting community has faced the multiple challenges of COVID-19; however, under the steadfast leadership of IOC president Thomas Bach, the Olympic movement has made steady progress, culminating in today's decision in favour of Brisbane."

An expanded Gabba stadium will be the centrepiece of the Games, which will run from July 23 to August 8, to be immediately followed by the Paralympics.

Events will be staged at more than 30 venues across south-east Queensland in Brisbane, the Gold Coast, Sunshine Coast, Logan, Ipswich and Redlands.

Two athlete villages are expected to be constructed — one in Brisbane, the other on the Gold Coast.

Up to 14,000 athletes will be accommodated in the Brisbane village in the inner north-eastern suburb of Albion.

The village project has been described as Queensland's largest waterfront urban renewal program.

The announcement came shortly after the Australian delegation made their final pitch for the Games, the third to be held in Australia.

During final deliberations, Brisbane faced little opposition with offers from India, Indonesia, Qatar, Spain and Germany failing to make it past the IOC board stage.

Arguments for Brisbane included Queensland being the fastest growing state in Australia and the fact that hosting the Games would align with a strategy to improve local transport infrastructure and promote economic growth.

It will also position Queensland as a tourism hub in the Asia Pacific region and attract major sports and events to the state, according to Brisbane's bid document released in February.

Australia previously hosted the summer Olympics in Melbourne in 1956 and Sydney in 2000.