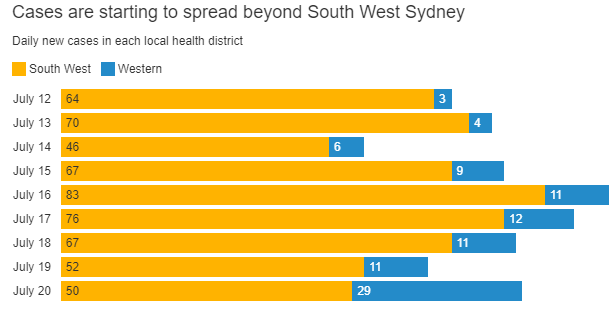 NSW's COVID-19 spotlight has turned to Western Sydney, where authorities are concerned about an increase in cases as the state grapples with a worsening Delta variant outbreak.

The state recorded 110 new locally acquired COVID-19 infections in the 24 hours to 8:00pm Tuesday— the third highest daily number since the cluster began on June 16.

While 50 of them were identified in the South Western Sydney Local Health District (LHD), authorities are particularly concerned about 29 new infections in the Western Sydney LHD.

NSW Health's Jeremy McAnulty said that meant the virus, which has so far spread from the city's eastern suburbs to the local government areas of Fairfield, Liverpool and Canterbury-Bankstown, was likely on the move again.

"People should be particularly vigilant and don't hesitate to come forward for testing at the slightest symptom."

The suburbs of particular concern are:

Premier Gladys Berejiklian said the new cases could be explained by "additional spillover" from the outbreaks in Fairfield, Liverpool and Canterbury-Bankstown and into surrounding suburbs.

"That is a high number but a number which reflects the high amount of testing we had," Ms Berejiklian said, while refusing to confirm if the Greater Sydney lockdown would run beyond the July 30 end date.

"It's really important for us to not talk about what might happen", she said.

"Once the number of cases and how they're transmitting comes through over the weekend and early next week, we'll have a better sense of what July 31 looks like."

Concerns are also increasing for Western Sydney's large Indigenous population if the virus continues to spread.

"This Delta strain is so much more virulent," she said. "On a personal level, I'm very concerned about it."

The health service provides GPs, health checks, chronic disease programs and drug and alcohol services to about 8000 Indigenous and non-Indigenous patients across Penrith, Mt Druitt and the Blue Mountains.

It's one of the Aboriginal community-controlled health services across Australia administering the Pfizer vaccine, with 240 doses delivered last week.

All Aboriginal and Torres Strait Islander people aged 16 and over are now eligible to access a COVID-19 vaccine.

"If it's in places like Rooty Hill and Mt Druitt where there's a really high Indigenous population … we need to vaccinate as many people to protect ourselves and the community,"  Ms McCauley said.

But Ms McCauley said her service is still battling fear and hesitancy about vaccines in the community, particularly AstraZeneca.

Though with Pfizer now being administered at the clinic, Ms McCauley said there has been a much better uptake.

She's concerned how a prolonged lockdown could impact the high-risk, vulnerable community.

"It would mean more people are out of work which is then going to have a roll-on effect on our lives — financially, socially, emotionally — we're all at risk of losing a loved one from this," she said.

"A lot of people [in our community] live from day to day let alone week to week.

"We have to take whatever steps we can to try and get through this."