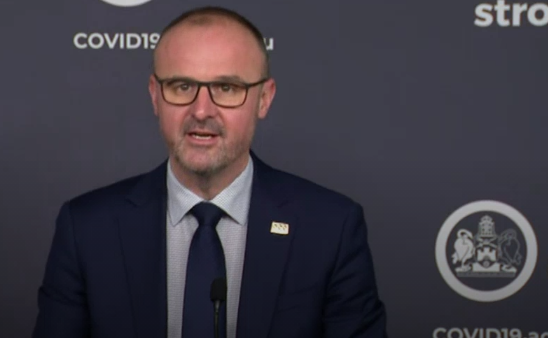 The ACT has recorded 13 new cases of COVID-19, with at least seven of those spending part of their infectious period in the community.

Of the new cases announced today, 11 are linked to a known case or cluster, with two still under investigation.

There are eight people in hospital with the virus, with three in ICU requiring ventilation.

There are currently 243 active cases of COVID-19 in the territory.

The ACT recorded its first death associated with the Delta outbreak yesterday — a man in his 90s who had been receiving end-of-life care at the Calvary Haydon aged care facility.

ACT Chief Minister Andrew Barr also yesterday announced a roadmap out of lockdown for the territory, with some restrictions set to ease from this Friday.

But Chief Health Officer Kerryn Coleman said an easing of restrictions meant getting testing was even more important.

"As we consider easing our restrictions for the immediate future at least, it will be more important than ever for people to be diligent around checking the daily exposure sites as well as being aware of the symptoms and presenting for testing," Dr Coleman said.

"Our analysis is showing an increase in people waiting five or more days after they are symptomatic to get tested.

"This has actually increased from 10 per cent to 13 per cent in the last week. This is really concerning."

Canberrans will have to wait a little longer for interstate travel

Mr Barr said despite announcing a roadmap out of lockdown for the ACT, Canberrans would have to wait for the majority of interstate travel to resume.

"As the ACT remains an identified COVID-19 hotspot by the Commonwealth government and by all other states and territories, there are strict requirements for you if you travel outside of the ACT," he said.

"And once you cross the border, out of the ACT, you have to adhere to the rules and restrictions of the jurisdiction that you are traveling to.

"Outstanding arrangements with ACT, New South Wales border communities will remain in place that allows those residents to travel to the ACT, this will continue beyond October 1."

"The three jurisdictions are on slightly different pathways out of lockdown, reflecting the different circumstances in each jurisdiction," Mr Barr said.

"I don't think there will be a different set of arrangements with Queensland, Western Australia, the Northern Territory, Tasmania or South Australia that will apply to distinguish ACT residents from New South Wales residents, and possibly even from Victorian residents.

"We are likely to be locked out of those COVID-free jurisdictions for a while longer."

Working from home should continue where possible

The Chief Minister also flagged that while some workers could return to the office from October 15, many should consider continuing to work from home.

"We're not looking for a rush back to the office.

"Into November and December, clearly there's a further easing of restrictions at those points and that would be when you would anticipate a higher level of workplace density."

Mr Barr said ACT government staff would be continuing working from home arrangements, and he recommended the private sector do the same.

"For now, between 15 October and 29 October, I would encourage people who can work from home to continue to work from home," he said.

"That is certainly going to be the ACT government's position in relation to our own staff, and I would encourage the private sector to continue working from home arrangements."

Mr Barr also announced the ACT government was in talks with the Commonwealth to further support businesses impacted by the lockdown.

"We are continuing to negotiate a package of further financial support for what impacted ACT businesses, and we're undertaking that negotiation directly with Commonwealth Treasurer Josh Frydenberg," the Chief Minister said.

"This includes businesses in hospitality, tourism, the arts, events and personal services. It may include other more niche industry sectors as well."

Mr Barr said he hoped the funding would continue after the ACT's lockdown ended, as many workers and business owners would still be struggling financially.

"In addition to jointly funded grants with the Commonwealth, the ACT government will continue to support impacted businesses, beyond the end of the lockdown on October 15," Mr Barr said.

"I have asked the Commonwealth to urgently update communities not just here in the ACT, but also in New South Wales and Victoria, on the future of this payment during the transition out of lockdown in each of the jurisdictions.

"I certainly hope that the Commonwealth will continue to make these payments, because there will be some individuals who will still have their hours of work restricted because of the gradual transition out of lockdown."

Dr Coleman said a pop-up testing site in Watson over the weekend had not resulted in more positive cases, and the take-up by residents had been encouraging.

The pop-up testing facility was erected after a high number of unlinked COVID-19 cases were detected in the suburb.

"We're probably the same position as we were a couple of days ago when we talked about that, I don't think the pop-up has given us any further cause for concern but we will continue to monitor that," she said.

ACT Health Minister Rachel Stephen-Smith also confirmed none of the cases announced today had been linked to the Calvary Haydon aged care facility or the Canberra Hospital surgical ward.

"The fact that we have seen well over 200 staff and patients tested negative so far, I think is a good indication of the processes that are in place at Canberra Hospital and their effectiveness," she said.

But she said the incubation period had not yet ended for either site.

"We have a 10-14 day incubation period under which we could continue to expect to see positive cases after that … so it is possible that we will have further cases," Ms Stephen-Smith said.

But Ms Stephen-Smith said the ACT was in a strong position to begin to reopen in mid-October.

"[We] have higher vaccination rates than pretty much any other jurisdiction around the world as they have opened up," she said.