COVID-19 rapid antigen home testing to be available from November

COVID-19 rapid antigen home testing to be available from November 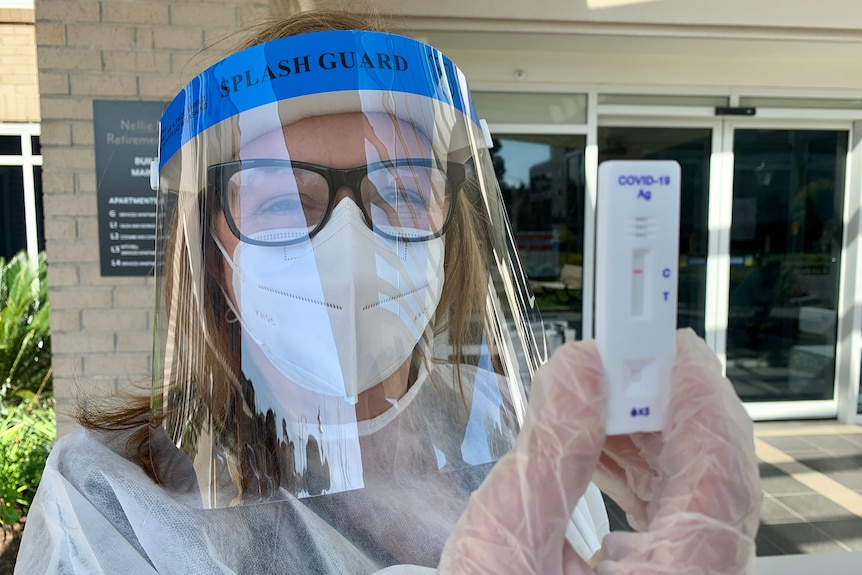 At the moment, rapid COVID-19 testing in Australia can only be conducted under the supervision of a health professional.(

)
Australians will be able to test themselves for COVID-19 at home from November, once the national medical regulator approves the testing measure.
Rapid antigen tests are already used widely in Europe and the United States and can provide a result within 20 minutes, but are less reliable than the PCR tests currently used.
The TGA has already approved 33 rapid antigen tests for use under supervision from a health professional, which are already being used by some businesses.
Health Minister Greg Hunt said test manufacturers could now apply for use-at-home authorisation, with approval expected within a month.
"Home testing will be available from November 1, obviously subject to individual tests being approved as safe and effective," Mr Hunt said.
"This is an important additional protection for Australians, home testing to support Australians and the national plan."
Mr Hunt said rapid antigen tests would not replace PCR tests, but provide an additional option for people as restrictions are eased in many cities.
States to determine how home tests are used
Further rules will be determined by state and territory governments, which will be able to take their own approaches.
The head of the TGA, John Skerritt, has told a Senate committee states may need to create public health orders requiring people to report a positive test result.
He also said that by November, higher vaccination rates across the country would lessen the consequences of false negative and false positive results.
Mr Hunt said he expected for states to mandate that people who record a positive COVID-19 test result at home to then undergo a PCR test for confirmation.
"The early guidance we have is that the expectation would be that if someone is positive they do confirm that with a PCR test," Mr Hunt said.
"But those rules, I should say, are not ones that would be set at a parliamentary level, but rightly set under public health orders at a state level."
Professor Skerritt said the rapid testing kits would also be monitored to ensure they accurately detected the highly-contagious Delta variant.
"When a lot of these home tests were developed for Europe and the US and North America, we didn't have much Delta around," he said.
"And so, absolutely critical is to check that they perform well with Delta."
A woman wearing PPE, including face shield, holding a rapid antigen test.
At the moment, rapid COVID-19 testing in Australia can only be conducted under the supervision of a health professional.(ABC News: Michael Barnett)
One reason for that is because companies still need to update their packaging to include information for people using the kits by themselves.
In a statement, the TGA said any rapid antigen tests approved for at-home use would have easy-to-use instructions, fact sheets and a supporting telephone helpline or instructional video.
The decision to approve home tests was expected to coincide with state and territory governments easing restrictions once 70 to 80 percent vaccination targets are met.
The Australia Medical Association (AMA) has previously said that state and territory governments may adopt different approaches to rapid antigen tests, given different case loads in the community.
LIVE UPDATES: Read our blog for the latest news on the COVID-19 pandemic
For example, rapid antigen tests are much more useful in jurisdictions that have hundreds or thousands of cases and are no longer pursuing an elimination strategy.
AMA vice-president Chris Moy told the ABC that states without COVID-19 outbreaks may be less likely to embrace their use, given PCR tests were more reliable.
"In somewhere like South Australia at the moment, it's really got a very, very limited use but in somewhere like New South Wales, things are completely the opposite way around," Dr Moy said.
"There's so much COVID out there [in NSW that] to some degree a miss is not quite as important, but knowing something has a great benefit."
abc
Farah News