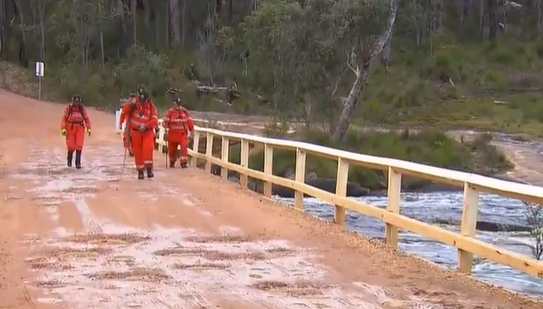 The search for a missing schoolboy last seen near Walpole in Western Australia has entered its third day.
Police have confirmed clothing belonging to the child was found near the river at Fernhook Falls shortly after he disappeared, but nothing has been discovered since.
Divers have also faced challenging conditions underwater, with visibility extremely limited.
Inspector Glenn Spencer said there were "lots of obstructions" in the way for police divers.
"The water is very high flowing and there's lots of obstructions ... very turbulent water, very tumultuous ground," he said.
"Lots of rocks, lots of logs, and very low visibility of 30 centimetres, so it is hands and knees searching."
SES volunteers have returned to help, but the land search was called off this afternoon.
"The search on the land was based on if the boy had self rescued," Inspector Spencer said.
"SES have searched 600 metres either side of the bank and about a kilometre downstream, and they've maximised every opportunity we've had to locate the boy on land."
The boy's family, originally from Denmark, is struggling to come to terms with the situation.
"The family are in the grieving process," Inspector Spencer said.
"They are obviously in shock and as the days go on their anxiety levels are of course quite high," Superintendent Kim Travers said.
With a break in the bad weather police were able to deploy drones first thing this morning, scouring the river banks for the young boy.
The schoolboy was last seen at his family's campsite in Fernhook Falls around 9am on Sunday.
It's believed he had been kayaking moments before he disappeared, but police today said no one saw him going into the water.
It is not known whether the boy could swim.
9Nesw
Farah News