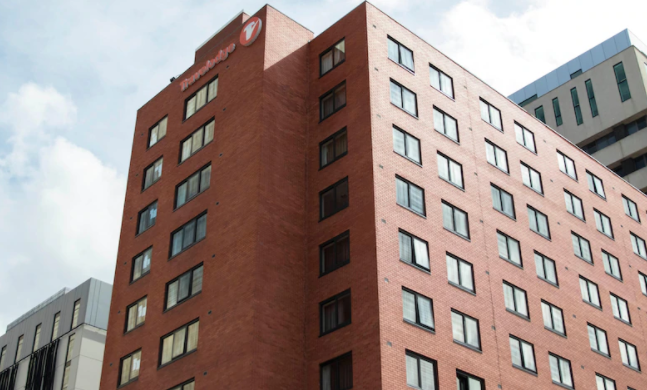 The traveller was taken to the Travelodge Hotel in Hobart's CBD after arriving without a valid G2G pass.(ABC

A COVID-positive 31-year-old NSW man who arrived in Tasmania without a valid border pass fled hotel quarantine and was found by police yesterday afternoon at an address in Hobart's northern suburbs, Premier Peter Gutwein says.

The man arrived in Tasmania on Monday evening without a valid G2G pass and was taken to the Travelodge Hotel in Hobart for quarantine.

The Premier said hotel security found the man was missing from his room on Tuesday afternoon during a welfare check.

"Tasmanian police were immediately notified and a check of the Travelodge Hotel was undertaken," Mr Gutwein said.

He said the 31-year-old man was found at an address in the outer northern suburbs of Hobart about 4:45pm yesterday.

The man was returned to hotel quarantine under increased guard and tested for COVID overnight, which returned a positive result.

Public Health has released a list of locations the man visited, with anyone who frequented the areas during the exposure periods advised they "must quarantine immediately, get a COVID-19 test, and stay in quarantine for at least 14 days from the date of exposure".

The exposure sites are:

Anyone who was in the Hobart airport arrival hall including baggage pickup between 8:54pm and 10:07pm on October 11 has been advised they "must quarantine immediately and get a COVID-19 test on or after day 5 following your exposure … on receiving a negative result, you will be able to leave quarantine".

The director of Public Health, Mark Veitch, said authorities were still conducting interviews and working to identify the close contacts of the man.

He said the man was on the Jetstar flight JQ715 from Melbourne into Hobart on Monday night, arriving about 8:30pm.

Dr Veitch said it was "quite likely most people on that flight were in quarantine" and that the flight had "quite a small number of people … not more than a dozen".

Dr Veitch said he would not identify the locations where the man had been while in the community.

"There is no public interest in providing the suburb the person was in unless there is a risk to the public in that suburb," he said.

"The interviews we are conducting with the case and their contacts will help us identify whether there is a risk that means we need to identify the suburb they were in.

"If there is no public health risk associated with that person's presence in a suburb, I wouldn't breach their privacy."

Under continued questioning from the gathered media about the areas the man had visited, Dr Veitch said he intended to remain "firm on not giving information that identifies or stigmatises people".

"It is correct to ask as tough a questions as you like about this case. I'm being completely frank and telling you all verified information available to me at the moment," he said.

"As further information comes out that's relevant to public risk, I'll disclose it."

Dr Veitch said it was "likely" the NSW man was infected with the highly infectious Delta strain of the disease.

Mr Gutwein said the man would receive two fines totalling just over $3,000 — for breaching quarantine as well as attempting to enter the state without the necessary approvals.

"Of course I am very disappointed … my understanding is this individual had been knocked back twice and had chosen to attempt to enter Tasmania on the last flight of the evening," Mr Gutwein said.

"Now we need to understand what has occurred at the Travelodge and how they have managed to abscond.

"I make the point, these are hotels, they are not secure prison facilities … we need to understand how this occurred."

More information on the current state of restrictions can be found on the Tasmanian government's coronavirus website.