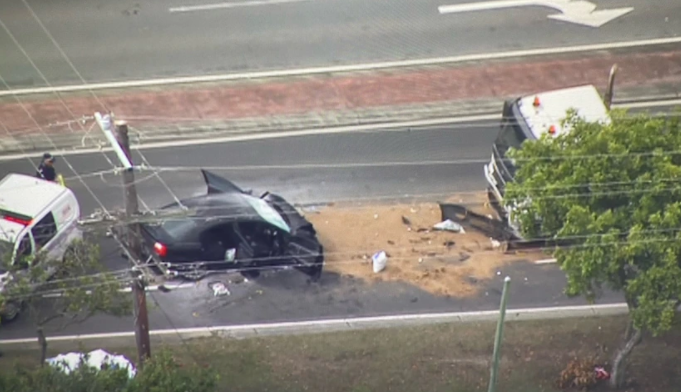 Two people died at the scene and third in hospital.(ABC News)
Three people have died after a multi-vehicle car crash on the Gold Coast this afternoon.
Paramedics were called to the corner of Arundel Drive and Brisbane Road about 12:30pm, where a sedan and a truck towing a boat had collided.
The ABC understands one of the vehicles crossed to the wrong side of the road before the collision.
Two people died at the scene. A man believed to be in his 50s died in hospital.
A 49-year-old male was taken to Gold Coast University Hospital in a serious but stable condition, while five other people received minor injuries but did not require hospitalisation.
Two other vehicles were also damaged.
Queensland Ambulance senior operations supervisor Adam Flory said 12 ambulances were called to the scene.
"The debris field for the accident was close to a kilometre long," he said.
"Ambulance paramedics will be provided support around the incident today to make sure that they're all travelling OK after seeing such a traumatic scene."
Mr Flory said Brisbane Road would be closed "for a considerable amount of hours".
"This is a very busy, busy road for this part of the Gold Coast, especially coming into school time," he said.
"It's raining, it's miserable — drive to the conditions and drive to the speed limit."
abc
Farah News