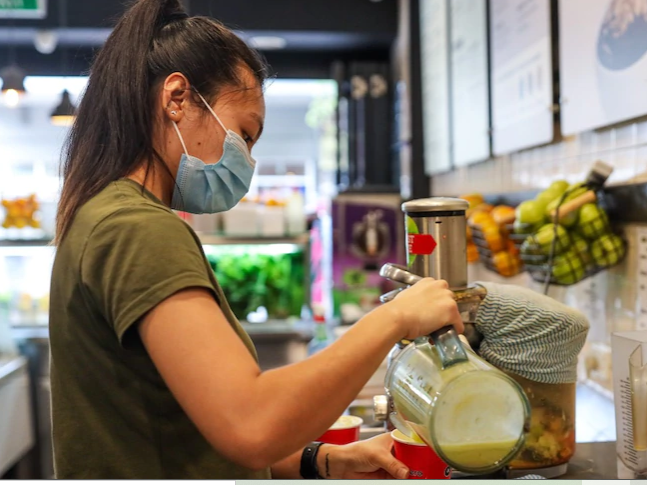 NSW has hit the next milestone on the COVID roadmap to recovery.(ABC News: Tim Swanston)

That means we've progressed to the next stage of the roadmap for easing restrictions, with the new rules kicking in from Monday, October 18.

The number of people allowed into a household, at outdoor gatherings, and at outdoor ticketed events have all increased.

Masks no longer have to be worn in offices, community sports can resume and nightclubs can reopen.

If you're fully vaccinated, here's a rundown of how the rules are being relaxed.

The number of visitors allowed in your home has increased from 10 to 20, not including children under the age of 12.

Outdoors, the gathering limit has increased from 30 to 50.

The caps on guests at weddings, wedding receptions and funerals has been lifted.

If you're not fully vaccinated, you're only allowed to gather outdoors in a group of two, and weddings are limited to five people.

"Controlled" outdoor public gatherings, including those that are fenced, seated, or ticketed, have had their density limit significantly increased from 500 to 3,000.

Earlier this month, NSW Premier Dominic Perrottet announced that masks would no longer be mandatory for workers in office buildings once the state hit its 80 per cent target.

The restriction was first introduced under the Berejiklian NSW government on June 24.

If you're a school teacher, or you're yet to receive both jabs, you'll have to continue to wear a mask at work.

Masks are still required in other indoor settings like public transport and at airports.

Fully vaccinated over-16s in NSW, and all children 15-and-under, have been able to train for community sports competitions since October 11.

From Monday, they can also officially compete.

Pubs are going to feel a lot less strange from Monday — you can finally stand up with a drink if you're inside.

The 4-square-metre rule still applies indoors, but the NSW government has confirmed that restrictions will be lifted on November 1, when there will be no caps on patron numbers.

Last week, the Premier dodged a fine after he was filmed standing with a drink at a media press conference.

?Can I have a boogie

It depends where you are.

Dancing is now permitted both indoors and outdoors at hospitality venues.

Nightclubs have been given the green light to reopen, but only on the condition that patrons sit to drink and refrain from dancing.

If you're really looking to bust a move, head to any other kind of hospitality venue, where you can now dance both indoors and outdoors.

Can I get out of town?

If you're a resident of Greater Sydney (which includes the Central Coast, Wollongong, Shellharbour and the Blue Mountains), you'll have to wait until November 1 to travel to regional NSW.

That date is the next big milestone on the COVID-19 recovery roadmap.

The COVID and Economic Recovery Committee made the decision last week to delay regional travel, citing low vaccination rates in some parts of the state.

If you live in regional NSW, you cannot travel into Greater Sydney, but you can move between regional local government areas.