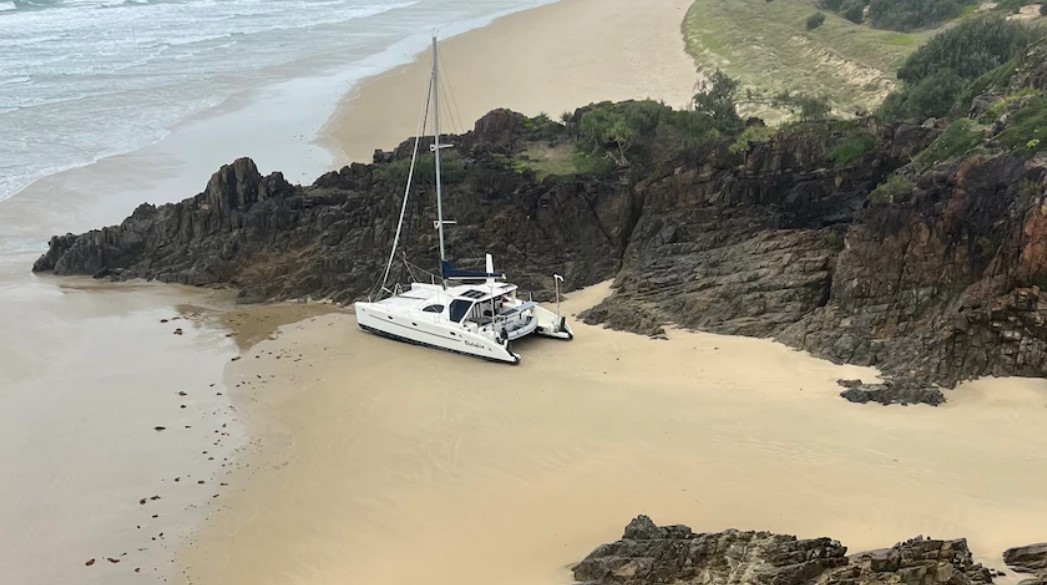 The man had to be rescued by air because of the rough conditions.(Supplied: Capricorn Helicopter Rescue Service)

A man in his 70s who fell from his boat off the central Queensland coast has been rescued after swimming in rough seas at night for nine hours.

The Capricorn Helicopter Rescue Service said the man fell overboard about eight kilometres from the coast, before eventually making it to shore early Tuesday morning, where he found his catamaran.

He was then stranded on the beach at Freshwater Bay, about 75km north of Yeppoon, and had to be rescued by helicopter due to rough sea conditions.

Central Queensland coast guard squadron commodore James Fleming said the team was initially called out to assist a 40-foot catamaran that had run aground and departed at about 5am on Tuesday morning to assist.

"We arrive just after 8:30am … after speaking to the owner [we] found out the hull on the starboard side had a couple of holes punched through it from rocks," Mr Fleming said.

Mr Fleming said the team wanted to collect the man and any belongings but the sea was too rough to get that close.

"We couldn't go in, there was very shallow water and high wave motion," he said.

"So we stood off, reported back to our commander … and we basically had requested the helicopter come in."

The crew remained at the scene to support the man.

"Just to talk to him and let him know what was going on, to make sure he was settled," Mr Fleming said.

Mr Fleming said the man had fallen off his vessel and had been swimming in the water, at night, for nine hours.

"That's that's as much as he really told us, in the scheme of things."

Mr Fleming said the man was able to radio for help from the beached catamaran.

Mr Fleming said the call had come in overnight, but 5am was the earliest the crew could set out.

"The call would've come in at about 10 o'clock the night before … but there was nothing we could we could do at that point," he said.

"Things were such that we wouldn't want to venture into that part of the world at night, with the conditions that were running."

Mr Fleming praised everyone involved in the rescue, including his crew and the rescue helicopter team.

"The whole thing, at the end of the day, was well coordinated and everybody worked as a team," he said.